At the peak of the storm, thousands of households lost power and hundreds of flights were cancelled. 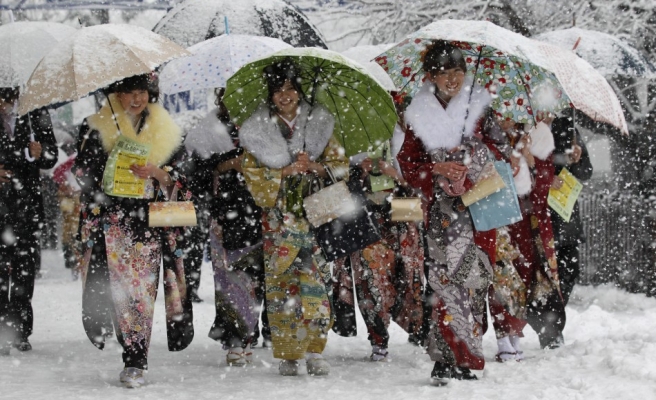 Snow-choked roads cut off thousands on Tuesday as parts of Japanstruggled to dig out from its second storm in a week, with the death toll rising to at least 23.

Train services were suspended in some areas after the Valentine's Day storm dumped more than a metre of snow in parts of central Japan and blanketed the capital with record snow for the second weekend in a row, snarling airline traffic and slowing production at some Japanese automakers.

The freak storm dumped more than 1.1 metres of snow in Yamanashi prefecture in central Japan, the most in more than a century of record-keeping, and lesser amounts across a wide swathe of the eastern and northeastern parts of the nation. Tokyo was hit by 27 cm (10.6 inches).

By Tuesday, least 23 people had died, including some killed in traffic accidents or by being caught under snow that fell from roofs. Several died in cars stuck in the snow, apparently from carbon monoxide poisoning as they ran their car engines to keep warm.

At the peak of the storm, thousands of households lost power and hundreds of flights were cancelled. Train services were disrupted and highways closed, with some of the nation's main arteries jammed with cars, some for days.

Toyota Motor Corp resumed operations at three plants in central Japan on Tuesday after suspending them a day earlier due to disruption in the supply of parts, but the outlook was unclear for anotherToyota plant. Other carmakers suffered similar disruptions.

In neighbouring South Korea, ten people attending a party for new university students were killed on Monday in southern Gyeongju when a building at a mountain resort collapsed under the weight of snow.