A Philippine ferry sank after colliding with a container ship owned by a company involved in the world's worst peacetime maritime disaster, killing at least 24 people and leaving more than 200 missing 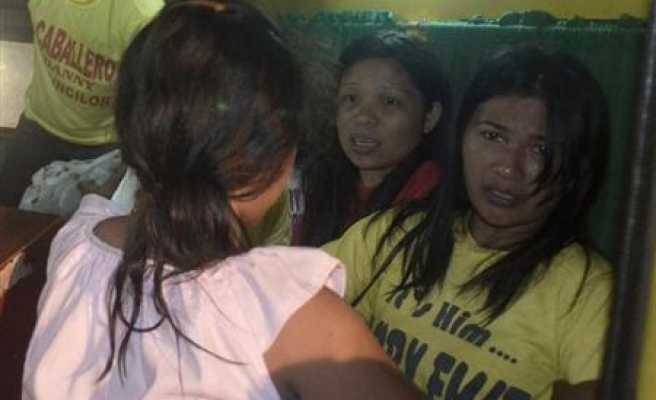 A Philippine ferry sank after colliding with a container ship owned by a company involved in the world's worst peacetime maritime disaster, killing at least 24 people and leaving more than 200 missing, the coast guard said on Saturday.

Divers were searching for bodies in the ferry, which sank on Friday minutes after the collision just outside the port of Cebu in the central Philippines that left two holes in the bow of the cargo vessel.

Some 629 people had been rescued, many by fishing boats, with 217 missing, the coast guard said.

The 40-year-old ferry was approaching the resort of Cebu when it collided with the departing cargo ship, the Sulpicio Express 7, at about 9 pm (1300 GMT).

"Search and rescue operations by the navy and coast guard are continuing with the help of some commercial vessels," acting coast guard chief Rear Admiral Luis Tuason told local radio.

"The number of missing is still huge."

The Sulpicio Express 7 is owned by unlisted firm Philippine Span Asia Carrier Corp, formerly known as Sulpicio Lines Inc, which owned the MV Dona Paz ferry that collided with a tanker in the Sibuyan Sea in December 1987, killing 4,375 on the ferry and 11 of the tanker's 13-man crew.

Scores, sometimes hundreds, of people die each year in ferry accidents in the Philippines, an archipelago of 7,100 islands with a notoriously poor record for maritime safety.

Overcrowding is common, and many of the vessels are in bad condition.

Tuason said there were 870 passengers and crew on board the ferry, above the 692 on the ship's manifest, but that it was licensed to carry 904 passengers.

The ferry had requested a change in its approach to port minutes before the accident, he said, but it was unclear if the cargo vessel had agreed.

The captains of the two ships were alive but had yet to be questioned, Tuason said.

The ferry sank about a kilometre off Cebu.

"We felt the cargo ship hit us and minutes later we noticed our ship was listing," passenger Aldrin Raman told reporters. "I grabbed a life vest and jumped overboard. I saw many passengers doing the same."

One of the crew said the ferry sank within 10 minutes of the collision.

"The collision left a gaping hole in the ferry and water started rushing in, so the captain ordered (us to) abandon ship," the crew member said. Most of the passengers were already wearing life jackets before the ship sank, he added.

Another passenger, Jerwin Agudong, said several people had been trapped. "It seems some were not able to get out. We saw dead bodies on the side," he said.

"It was very dark and we could hear a lot of people shouting, asking for help," said George Palmero, a 35-year-old fisherman who helped pull 10 survivors from the water.