29 killed at police funeral in Pakistan

A suicide bomber killed 15 Pakistani police officers at the funeral of a policeman in the western city of Quetta on Thursday, in a scene captured live on television as cameras broadcast the event. 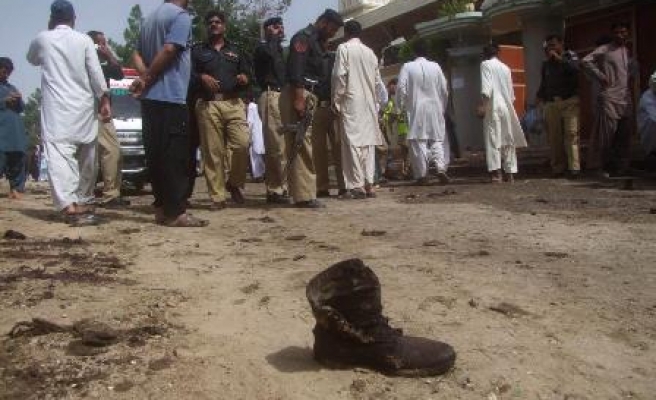 A suicide bomber killed 29 people in Pakistan on Thursday, including five senior police officers, at the funeral of a policeman in the city of Quetta in a scene captured live on television as cameras broadcast the event.

A Reuters reporter at the funeral described chaos with bloodstained officers being carried away and put into ambulances.

Some of the dead and wounded were children attending the funeral, he said.

Among the dead was Fayyaz Sumbal, the deputy inspector general of operations for the city of Quetta.

Weeping policemen wandered among the blood and body parts, looking for colleagues or sat, shocked and in silence, amid abandoned shoes and other belongings.

The suicide bomber was wearing a jacked packed with ball bearings and shrapnel, said a member of the bomb squad.

He detonated his explosives just outside the mosque as senior officers lined up to offer prayers for their colleague, who was gunned down earlier on Thursday.

It was not immediately clear who was responsible for the attack.

The latest attack, at a supposedly secure location in one of the country's most heavily militarised cities, further calls into question the ability of the security services to defend themselves.

Pakistan has been hit by a wave of attacks since the government of Prime Minister Nawaz Sharif came to power after a May election, including a bombing at military intelligence headquarters in the city of Sukkur and a jail break that freed 250 prisoners.

In Afghanistan on Thursday, a bomb planted in a graveyard killed 14 women and children, many of them picnicking at the graveside of a family member during the Muslim Eid al-Fitr holiday, officials said.