A truck carrying police officers was targeted in Quetta, capital of southwestern Balochistan 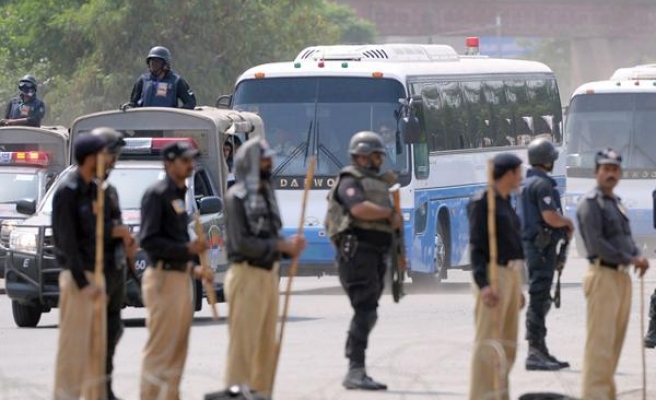 At least seven policemen were killed and 22 injured in a bomb attack and a subsequent ambush in southwestern Balochistan province early Wednesday, police and local media reported.

He said it was premature to say if it was a blast triggered by remote control, or a suicide bombing.

Local media, however, quoting unnamed police officials, reported that the blast could be the act of a suicide bomber.

Footage aired on local Geo TV showed charred wreckage of the truck lying in the middle of the road, while honking ambulances shifting the bodies and the injured to the hospitals.

Waseem Baig, a spokesman of the Civil Hospital Quetta told reporters that at least ten injured -- a couple of them critically -- were admitted to the hospital.

One hour after the bomb blast, another policeman was killed in an ambush by unknown gunmen in a busy locality of Quetta.

There was no immediate word of responsibility for the bombing, however Taliban militants, and Baloch separatists have been involved in attacks on security forces in the recent past.

The large Balochistan province, which is also considered to cover parts of neighboring Iran and Afghanistan, is strategically important because of the rich presence of copper, zinc and natural gas but has beset by violence for over six decades, with separatists claiming that it was forcibly incorporated into Pakistan at the end of the British rule in 1947.

Various sectarian outfits, including Lashkar-e-Jhangvi, have also been active in the region, especially in Quetta for the last decade.