Angry Christians took to streets of Karachi, Lahore, Faisalabad, Sialkot, Multan and other parts of the country to protest suicide bombing 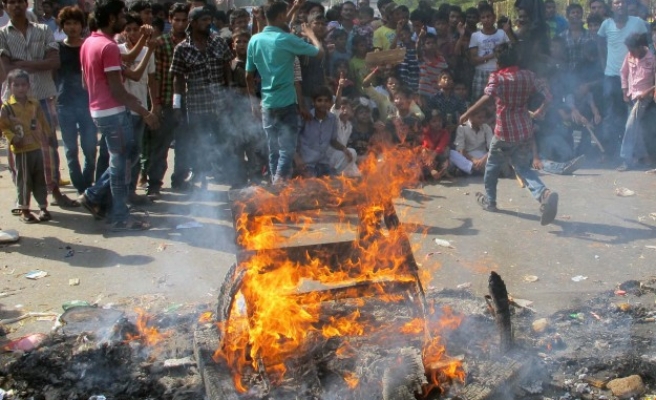 At least 75 people have been killed and 60 injured Sunday when two suicide bombers blew themselves outside and in the courtyard of a church in the northwestern city of Peshawar, sparking angry protests by Christians countrywide.

"The church was the target of the suicide bombers," Sahibzada Anis, the Commissioner of Peshawar, told Anadolu Agency.

Anis put the death toll at 75 people after many of the wounded succumbed to life-threatening injuries inside Lady Reading Hospital.

Eyewitnesses said more bodies are still lying inside the church building, with the death toll expected to rise.

According to eyewitness, a suicide bomber blew himself up near the security barrier of the church where hundreds of Christians were attending the Sunday service.

Eyewitnesses told reporters that they have heard two blasts.

The first seemed like a hand grenade attack to baffle the security personnel, while the second was a huge explosion which could be heard within an area of nearly three kilometers.

Security officials later confirmed that both blasts were suicide bombings, one at the gate and the second inside the church courtyard.

"It was a deafening blast," Shamshad Masih, a local Christian who sustained injuries in his back and arms, told Anadolu Agency at Lady Reading Hospital where doctors are struggling to save lives of several badly-injured people.

"I could not initially figure out what had happened," he added.

Masih said he was about to enter the church building when the blast occurred.

"I did not see the suicide bomber as it happened behind my back," he recalled.

"I was tossed in air and fell on the ground," added a panicked Masih, who has lived in the Kohati Gate area, where the church is located, for the past 35 years.

"All I saw was plumes of smoke wafting upward and people running from here to there screaming."

Dozens of people, including Muslims, thronged the Peshawar's Lady Reading Hospital after the authorities appealed for blood donation to rescue the wounded.

"I am here in the name of humanity," Mukhtar Zaman, a local shopkeeper, told AA sitting in a dense corridor of the hospital waiting for his turn to donate blood.

"Those who have committed this inhuman act have shamed Islam and Pakistan," he insisted.

The brutal attack has sent shockwaves among the country's largest majority, which is already feeling insecure due to the growing militancy in this south Asian Muslim state, a close ally of the United States in the so-called war on terror.

Angry Christians took to streets of Karachi, Lahore, Faisalabad, Sialkot, Multan and other parts of the country to protest the suicide bombing.

The Council for International Religion, which deals with the Christian Missionary institutions in the country, has announced three days mourning.

The council suspended study in missionary schools and colleges in Peshawar for three days.

Pakistani Christian community leaders have time and again condemned the US invasions of Afghanistan and Iraq, and US drone attacks in Waziristan.

Christians, who make up 3 percent of Pakistan's 180-million population, continue to be targeted by militants.