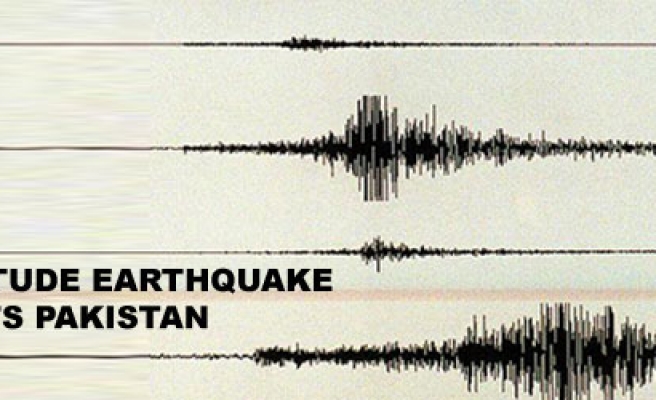 A powerful earthquake registering 7.8 on the Richter scale rocked the southern and southwestern parts of Pakistan on Tuesday, killing at least 32 people and injuring many others.

"The death toll may further shoot up as several injured are in precarious condition," he warned.

Buledi confirmed that the towns of Awaran, Pasni and Dalbadin had all been badly affected by the quake.

"[A state of] emergency has been imposed at all the hospitals in the three districts and rescue teams are being sent," he said.

Six bodies have been pulled out of the debris in Awaran alone, Deputy Commissioner Abdul Rasheed Baloch confirmed.

"Rescue operations are underway, as many people are still lying under the debris in various parts of the district," he told AA.

At least four people were reported injured in Pasni where several buildings and houses were fully or partially damaged.

Army teams backed by helicopters have been sent to the affected areas as the local administration faced difficulties to cope with the gravity of destruction caused by the earthquake, the Inter Services Public Relations (ISPR) announced.

Some two hundred troops, in addition to personnel of the paramilitary force Frontier Constabulary, who are already deputed in Baluchistan, have been sent to Awaran, and Pasni districts.

The quake disputed communications in the towns, making it difficult for rescue workers and government officials to evaluate the extent of the destruction.

The epicenter of the earthquake was Dalbadin on the border with Iran, located some 120km southwest of Baluchistan's Khuzdar district.

In April, a 7.8-magnitude quake centered in southeast Iran, close to the border with Baluchistan, killed 41 people and affected more than 12,000 on the Pakistani side of the border.

"The intensity of the earthquake was higher than the one in October 2005, which was 7.6 on the Richter scale," chief meteorologist Tauseef Alam told Anadolu Agency.

"But the depth of this earthquake is three times less than that one [in 2005]," he added. "Otherwise, it might have caused massive losses to life and property."

According to the US Geological Survey, the depth of today's tremor was 10km, compared to 36km in October of 2005.

The 2005 quake rocked the Azad Kashmir region and parts of the northwestern Khyber Pakhtunkhawa (KP) province, killing over 80,000 people and displacing millions.

"It was a massive shock," Ghulam Mustafa, a sales manager at a local insurance company, told AA.

"I could not initially understand what happened," he said. "Then I noticed my chair was shaking."

Mustafa added: "Running was the first thing that came to my mind."