Pakistani Janjua believes that she, her missing husband and their kids are all collateral damage from 9/11. Nearly 2,000 Pakistanis who have gone missing since the beginning of the "war on terror." 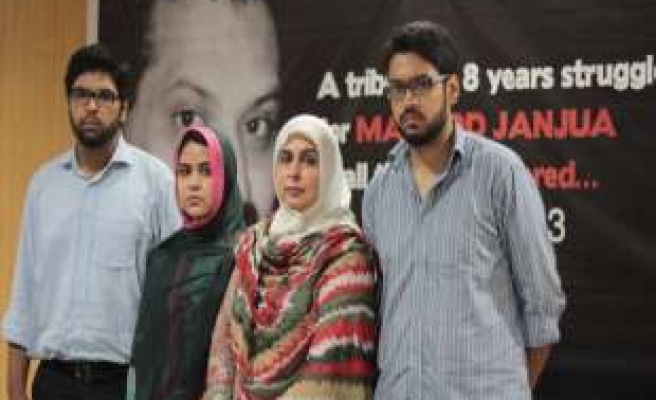 Amina Masood Janjua, a housewife, knows very little about the 9/11 attacks on New York and Washington in 2001.

Standing in court on the 12th anniversary of the attacks, Janjua believes that she, her missing husband and their kids are all collateral damage from 9/11.

"I have been paying the price for 9/11 since the disappearance of my husband who had nothing to do with it," she told Anadolu Agency outside Pakistan's Supreme Court.

"It was a terrorist attack; every sane Pakistani condemns it. I understand and feel their pain, but I expect the same from them," she added.

Janjua has been running from pillar to post trying to determine the whereabouts of her husband, who went missing in 2005.

Thousands of Pakistanis have gone missing since 2001 amid accusations made to Pakistani security agencies, which have detained many of them on terrorism suspicions as part of the so-called "war on terror."

Janjua insists that her husband Masood and his friend Faisal Faraz were kidnapped by secret agencies in 2005 from the garrison city of Rawalpindi "on suspicions of having links to Al-Qaeda and Taliban."

Since then, the housewife has left no stone unturned in her uphill struggle to find her husband. "It's like an unending ordeal, an unending pain," she said.

The prosecutor-general's office on Wednesday told Chief Justice of Pakistan Iftikhar Chaudry, who is following up on the case of hundreds of missing Pakistanis, that Masood and his friend had been killed by Al-Qaeda and the Taliban in 2005.

"This is a total lie," the housewife cried, challenging the government's version of events.

She says she has concrete information that her husband is still alive and in the custody of clandestine government agencies.

"A senior-level army officer personally told me that my husband was in a secret detention center in the Westrige area of Rawalpindi," she said.

"I will not bow to them [clandestine agencies]," Janjua said defiantly. "They beat up my son in front of me just because he demanded his father's release, but neither he nor I will be cowed by these attempts."

Janjua says the disappearance of her husband is like an open wound. "No one can understand our pain," she said.

"If someone dies, you recover after a few weeks or months," she added. "But if your father, son or husband is missing, you die every day."

The woman says her eldest son Mohamed, 22, his brother Ali, 21, and their sister Ayesha, 18, wake up every morning with the hope of finding their lost father.

"My daughter was only ten years old when she last saw her father," she recalled. "It was 9:30am when she hugged her father for the last time before he left home."

"It has been eight years, but the clock in her room still tells the same time – 9:30am – as when she last hugged her father," said a tearful Janjua.

"Having been her father's pet, she has taken his disappearance worse than her brothers," she added. "She hardly smiles. She has only one question, 'When will I see my father again?'"

"But I have no answer for her," Janjua said, fighting back tears.

Janjua recently sold an IT training center in Rawalpindi that had been owned by her husband. She ran the center until July 30, the 8th anniversary of his disappearance.

"I just wasn't able to run it anymore," she said. "I have been fighting a multi-pronged battle: taking care of my children in the absence of their father; fighting his case in the Supreme Court; and fighting to find other missing persons."

In 2006, Janjua founded the Defense of Human Rights (DHR) group to campaign for hundreds of missing Pakistanis believed to be held in secret detention on suspicion of having links to militant groups.

"No one can feel the misery faced by the families of missing persons more than me," she said. "That's why, instead of simply crying at home, I have decided to rise against this injustice."

The organization represents relatives of missing persons in all four provinces of Pakistan. It has gathered data on nearly 2,000 Pakistanis who have gone missing since the beginning of the war on terror.

"We just demand the right to a fair trial," she noted. "If they [missing persons] have done something wrong, they should be brought before court and punished. We would not object."

Acting on a request from the DHR, the Supreme Court in 2010 ordered the formation of a commission headed up by a retired Supreme Court judge who has since managed to recover dozens of missing persons.

According to Janjua, approximately 600 of them have been released within the past seven years.

The commission, however, has so far failed to hold any individual or agency responsible for the illegal detention of recovered persons.

Janjua has seen no relief for the missing persons – or their families – with the arrival of Prime Minister Nawaz Sharif to office.

"For us, there is no difference between [former president Asif] Zardari and Nawaz Sharif," she said.

"During Zardari's regime, we ran here to there for the recovery of our loved ones," Janjua added. "Now we're doing the same with Sharif in power."