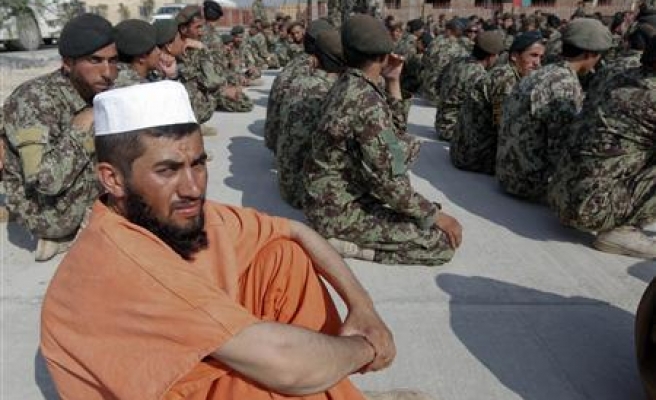 Afghanistan has accused British and U.S. forces of secretly holding Afghans in jail, saying one man had been held for more than two years while others had "disappeared", further souring ties between Kabul and its Western allies at a sensitive time.

The latest dispute could complicate relations as Washington seeks to implement a security agreement allowing a small force to stay in the country, a pact incumbent leader Hamid Karzai refuses to sign.

The allegations, presented in a state-backed document obtained by Reuters, were made as Afghanistan prepares to induct a new president more than 12 years after U.S.-led forces drove the Taliban from power.

Karzai established a fact-finding committee to investigate reports foreign forces were still operating detention facilities in breach of an agreement, which demands Afghan detainees must be handed over to Afghan authorities within 96 hours of capture.

"This a clear violation of Afghanistan's sovereignty," Karzai's spokesman Aimal Faizi told Reuters. "They have no right to detain Afghans on Afghan soil."

U.S.-led forces have captured thousands of suspected fighters since invading Afghanistan after the Sept. 11, 2001, attacks on the United States.

The NATO-led coalition force said in a statement it was waiting to receive the commission's official report "to better understand the basis of the allegations and findings".

It said all facilities used by coalition forces operated in accordance with international standards that are routinely monitored by the International Committee of the Red Cross.

The report detailed the discovery of seven detention facilities, and said the committee members had seen 23 Afghan nationals in prisons at two coalition bases in southern Kandahar and Helmand provinces.

Faizi said poor record-keeping at the facilities, raised serious concerns about the well-being of some of the inmates who simply "disappeared".

"There should be a record of what has happened to them. This is all very suspicious," Faizi said.

The document details the names and details of six prisoners at a U.S. and British forces facility in Kandahar, and another 17 at Britain's Camp Bastion in Helmand.

"None of the 17 prisoners were there less than a month, a detainee named Noor Ahmad had been there for 31 months," the document said.

Karzai's government has long complained that foreign forces have locked up many Afghans on dubious grounds and with no proper judicial process.

After a drawn-out dispute with its allies over who should control prisons in Afghanistan, the government fully took over their administration last year.

The government has since released thousands of inmates without U.S. objection. But the United States and its NATO allies say that dozens freed this year are a security threat, and should be tried or investigated further.

Even though the two presidential candidates likely to contest a run-off in June say they will sign the security pact, Karzai is expected to hold considerable clout in the next administration as an adviser. His views are bound to impact some foreign policy issues.