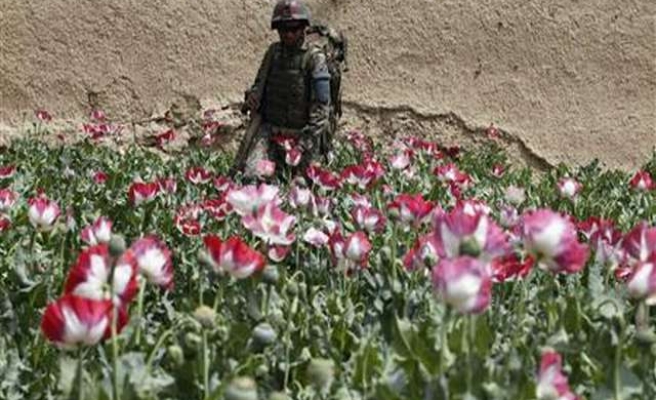 Afghanistan's opium crop will hit a new high this year, the United Nations said on Wednesday, presenting the new president with a challenge in tackling the trade.

Opium cultivation expanded to 224,000 hectares (553,000 acres) in 2014, according to a U.N. Office on Drugs and Crimes (UNODC) survey, up 7 percent from last year, rising in most poppy-producing provinces in Afghanistan.

The survey is likely to further embarrass aid donors who have invested millions of dollars in eradication, only to see crops soar to unprecedented levels, fuelling corruption and instability.

The figure showed counter-narcotics efforts had failed, the UNODC's Jean-Luc Lemahieu told reporters, but there was hope for success under the new government.

"(Changing) the economic incentives away from the illicit economy to the licit economy, now that's a hell of a task, but that's exactly what indeed this new government seems to stand for," said Lemahieu, the UNODC director for policy analysis and public affairs.

President Ashraf Ghani was inaugurated in late September, following months of tension over who won an election. The political dispute accelerated a sharp economic downturn caused by the withdrawal of foreign troops.

"For him the criminalization of the economics and politics of Afghanistan is one of the main problems, it penetrates everything and anything he wants to achieve," Lemahieu said.

Afghanistan produces more than 80 percent of the world's illicit opium and profits help fund the insurgency. The bumper crop had dampened prices, the UNODC said, but farm-gate profits at $850 million remained near 4 percent of gross domestic product.

Ghani has a comprehensive plan to tackle the drug problem, Lemahieu said, including creating incentives for farmers to plant alternative crops and prosecuting smugglers.

Ghani, who wrote a book on how to fix failed states, has said the key to opium eradication is jobs. He has also suggested cotton was one crop that could replace opium if the West scrapped tariffs on Afghan textiles.

The United States has spent $7.6 billion on counter-narcotics efforts in Afghanistan since ousting the Taliban in 2001, according to the U.S. government watchdog for reconstruction.