Afghanistan is due to go to the polls on Saturday to elect 249 parliamentarians. 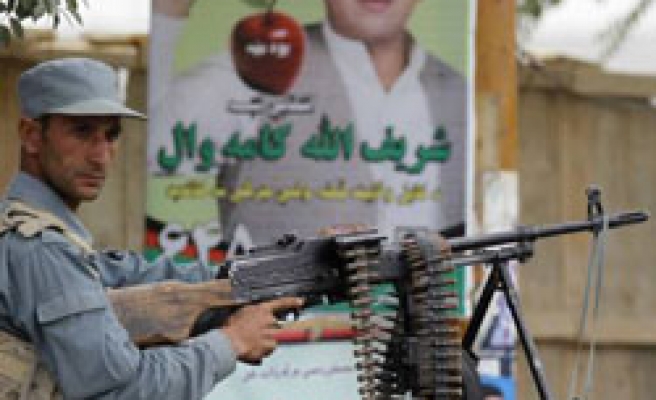 Two candidates were among more than 20 people kidnapped in Afghanistan, officials said on Friday on the eve of a parliamentary election.

Afghanistan is due to go to the polls on Saturday to elect 249 parliamentarians.

Reports of kidnapping spread from Afghanistan's west to east, although the capital, Kabul, was relatively quiet as security forces imposed a clampdown.

Qari Safiullah, another candidate in western Herat, had been missing for the past three days along with three campaign workers, Safiullah's family told Reuters.

More than 2,500 candidates are standing nationwide for the 249 seats in the lower house of parliament.

Karzai, re-elected to a second term last year amid massive fraud that was mostly in his favour, urged all Afghans to vote, including those Taliban who are the sons of this country.

"We should try to do our best under the current circumstances. It is very important that the Afghan people come out and vote," Afghan President Hamid Karzai told reporters.

The Taliban claimed responsibility for the abduction.

On Thursday, the Taliban renewed its warnings to attack foreign and Afghan targets and urged voters to boycott the votes.

"We call on our Muslim nation to boycott this process and thus foil all foreign processes and drive away the invaders from your country by sticking to jihad and Islamic resistance," the group said in a statement.

Thousands of people may not be able to vote, with many polling stations -- particularly in Taliban strongholds -- to remain closed because security cannot be guaranteed.

Observers fear security worries could lead to a low voter turnout, as it did last year.

However, voter turnout was very low in the south and east where Pashtuns, Afghanistan's main ethnic group, dominate and where the Taliban has its strongest support.

The United Nations' top diplomat in Afghanistan, Staffan de Mistura, has said a turnout of between 5 million and 7 million out of Afghanistan's roughly 11.4 million registered voters would be considered a success.

Afghanistan's U.N.-backed Electoral Complaints Commission (ECC) has warned of a "disputatious" process, with thousands of complaints expected from among the almost 2,500 candidates who fail to win one of the 249 seats in the wolesi jirga, or lower house of parliament.

Last year's election and the possibility of more widespread fraud have left an underlying cynicism among many voters who feel the system benefits only the political elite.

"Democracy, what's that?" said Darya Khan, a 40-year-old driver. "I'm not going to vote, the people who get elected are just in it for themselves. They are not working to benefit the country, they are not thinking about the poor."