Afghan president fumes at prisoner deal made behind his back

"The president is now even more distrustful of U.S. intentions in the country," said the source at President Hamid Karzai's palace in Kabul, who declined to be identified. 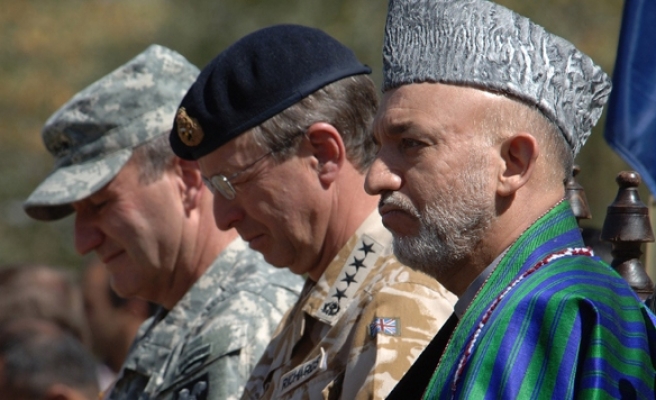 The Afghan president is angry at being kept in the dark over a deal to free five Taliban leaders in exchange for a captured U.S. soldier, and accuses Washington of failing to back a peace plan for the war-torn country, a senior source said on Monday.

The five prisoners were flown to Qatar on Sunday as part of a secret agreement to release Army Sergeant Bowe Bergdahl, who left Afghanistan for Germany on the same day.

The only known U.S. prisoner of war in Afghanistan, Bergdahl had been held captive for five years.

"The president is now even more distrustful of U.S. intentions in the country," said the source at President Hamid Karzai's palace in Kabul, who declined to be identified.

"He is asking: How come the prisoner exchange worked out so well, when the Afghan peace process failed to make any significant progress?"

Karzai has backed peace talks with the Taliban movement, which ruled Afghanistan between 1996 and 2001 and has fought since then against U.S.-led forces in the country.

But they have come to little so far, and the group has moved swiftly to dash hopes that the prisoner swap would rekindle peace talks between it and the Afghan government.

The palace official also said Karzai was worried about further deals being cut without his knowledge.

"It indicates that other deals could be negotiated behind the president's back," he said.

Karzai has yet to comment publicly on a swap that is bound to deepen the mistrust of a leader who has been fiercely critical of the U.S. administration in recent years.

He is due to step down as president later this year, but many Afghans believe Karzai will continue to wield considerable influence over policy from behind the scenes.

Karzai's press office said in a statement that the U.S. deal to transfer five Taliban militants from a Guantanamo Bay jail to Qatar violated international law.

"No government can transfer citizens of a country to a third country as prisoners," said the statement, issued on behalf of the foreign ministry.

IN A HURRY TO LEAVE?

The prisoner swap has stoked widespread anger in Afghanistan, where many view it as a sign of a U.S. desire to disengage from the country as quickly as possible.

Washington has mapped out a plan to fully withdraw all of its troops by the end of 2016.

Under the terms of the deal, cut by Qatari intermediaries, the five Taliban detainees were released from Guantanamo Bay, Cuba, where they had been held since it opened in 2002, and flown to Qatar where they must stay for a year.

Senior officials at the Afghan intelligence agency say they believed the men would return to the battlefield.

The swap has similarly drawn protest from U.S. Republican politicians.