Afghan protesters dead as Holy Koran abused in US

Afghans protested strongly for the third straight day on Sunday while there were three other cases of desecration of the Muslim holy book. 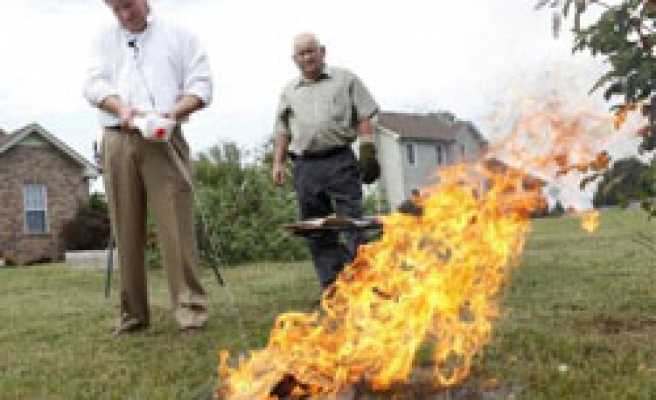 Afghans protested strongly for the third straight day on Sunday over a U.S. pastor's abandoned plans to burn the Holy Koran while there were three other cases of desecration of the Muslim holy book.

Two protesters were shot and killed in eastern Logar province, a district official said, taking to three the death toll in protests staged since Friday.

Ceremonies in the United States on Saturday marked the ninth anniversary of the attacks.

Jones's plan and proposals to build an Islamic cultural centre and mosque near the site of the toppled World Trade Center in New York highlighted a growing debate in the United States about religious tolerance.

Hundreds of people favouring and opposing the cultural centre and mosque gathered in New York for peaceful rallies hours after ceremonies in the city -- and in Washington and Pennsylvania -- to mark the attacks that killed nearly 3,000 people.

Word of the intention to burn the Holy Koran had already triggered outrage in Afghanistan under US-led invasion for years and across the Muslim world.

In Afghanistan, angry protesters chanting "Death to America" and "Death to Christians" clashed with security forces in Logar, south of the capital.

Seven demonstrators were wounded, one seriously, when Afghan security forces opened fire to disperse hundreds of protesters marching to Pul-e-Alam, the capital of Logar, officials said.

The protesters threatened to attack foreign military bases in the occupied country. Taliban insurgents are battling almost 150,000 foreign troops in the country.

"The governor must give us an assurance that the church is not going to burn the Koran, otherwise we will attack foreign troop bases in our thousands," protester Mohammad Yahya said.

Major Patrick Seiber, a spokesman for the NATO-led International Security Assistance Force in Afghanistan's east, said ISAF was aware of more protests in Logar on Sunday, but put the crowd at about 100, some wielding sticks and throwing stones.

Four demonstrators were wounded in Logar on Saturday, a day after a protester was shot dead when a crowd attacked a German-run ISAF base in Faizabad in northeastern Badakhshan province, one of many protests across the country.

"Burning Holy Koran in US"

There were at least two incidents of abuse of the Koran in Lower Manhattan. Separately, two evangelical preachers not affiliated with any mainstream church burned two copies of the Koran in Tennessee.

Jones, head of a tiny and obscure church in Gainesville, canceled his plans on Thursday and told NBC's "Today" show in New York he would not burn the Koran, "Not today, not ever."

One mantore pages from the Koran, and set them alight. In another incident, a man tore pages from a copy of the Koran and made vulgar gestures with it. Onlookers were shocked at the sight.

Near Nashville, Tennessee, evangelical Pastor Bob Old and another preacher used lighter fluid and a lighter to burn at least two copies of the Koran in his yard.

However, there were no reports of any arrests.

A few hundred demonstrators gathered across the street from Jones' Dove World Outreach Center church in Gainesville at the time the Koran burning had been scheduled to take place.

Police said they stopped one man near the church from trying to burn a Koran, but did not arrest him. "He took out a lighter and the book and we grabbed both of them off him," a Gainesville police spokeswoman told Reuters.