The aircraft was only being used temporarily by Dempsey and his staff as shrapnel from the rockets also damaged a nearby helicopter. 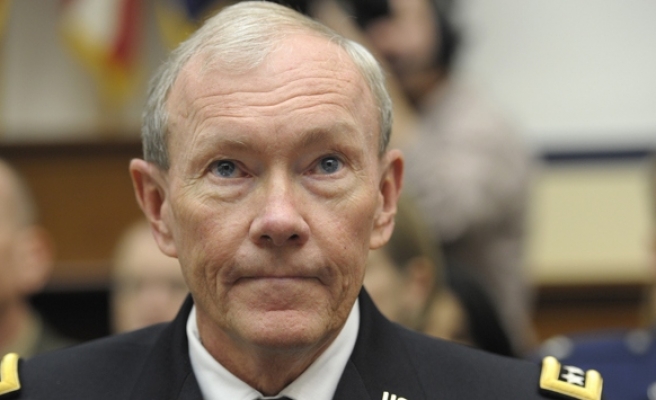 Insurgents fired two rockets at the main NATO airbase in Afghanistan, damaging an aircraft used by U.S. Joint Chiefs of Staff chairman Martin Dempsey, a NATO spokesman said on Tuesday. The general was not on board at the time.

Dempsey arrived in the country on Monday in a C-17 transport aircraft which was parked at Bagram Airbase, north of Kabul, when two rockets landed near the apron late on Monday night, slightly wounding two ground staff.

"He was nowhere near the aircraft. We think it was a lucky shot," NATO senior spokesman Colonel Thomas Collins said.

The aircraft was only being used temporarily by Dempsey and his staff. Shrapnel from the rockets also damaged a nearby helicopter.

Dempsey, who had been in the country for talks with NATO and Afghan commanders on a string of recent shootings, was sleeping in his quarters when the rounds struck and left the country afterwards on another aircraft.

"No one was seriously injured in the attack," a Pentagon spokeswoman said.

Bagram, which is home to around 30,000 military and civilian personnel, is occasionally targeted with rockets and mortar shells fired by insurgents from surrounding hills and fields. In 2007, the heavily guarded base was targeted during a visit by former U.S. vice president Dick Cheney.

A Taliban spokesman claimed responsibility for the attack in a text message and denied it was indirect fire, saying it was based on "accurate information".