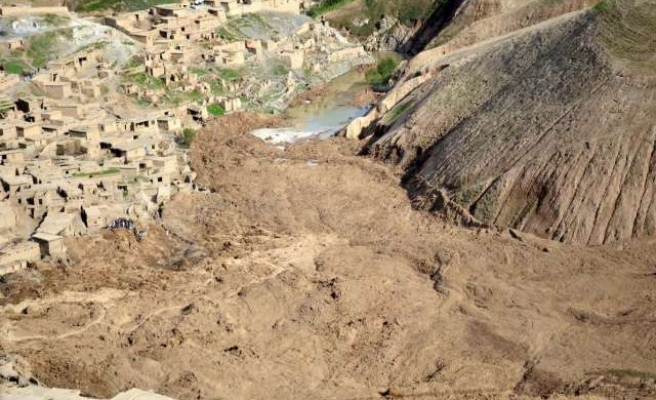 The Afghan government officially named the scene hit by a massive landslide in Badakhshan province as a mass grave and started focusing on helping the survivors on Sunday.

“The religious scholars and high level officials has convinced the locals to give up looking for dead bodies,” Haji Abdul Wadoud, governor of Argo district in Badakhshan told Anadolu Agency.

“It is almost impossible to search for dead bodies,” he said. “When muslims die, they must be buried, and they are already under a huge hill of mud."

The first Vice President Mohammad Younus Qanooni also visited the area on Sunday along with some cabinet members and religious authorities.

“All agreed that it would be named as the mass grave of Abe Barik martyrs,” Abdul Wadoud said.

At least 300 families have been trapped under dirt and mud, whereas only 255 of the dead bodies have been identified so far, but the local authorities estimate that more than 2,100 people are dead.

Heavy rains in the last few weeks have also caused flash floods in different parts of the country, taking dozens of lives and damaging hundreds of houses.

“Emergency packages were prepared for 350 families in the first stage of the aid campaign,” Orhan Sefik, Central Asia regional coordinator of the foundation, told Anadolu Agency.

He said the packages contained food, rugs, blankets and kitchen utensils, adding that the foundation would continue to provide aid to the area.

Earlier, Noor Mohammad Khawari, head of the Badakhshan central hospital told Anadolu Agency that it would be tragic if the locals agreed to the village becoming a mass grave although he said it would require an extraordinary effort driving by a big number of professionals and machinery to find the buried individuals.

“Now they are discussing securing the scene from the threat of floods so that members of the victim families can come here to prayer” Khawari added.

In a statement released from his office late Saturday, Afghan President Hamid Karzai said he was deeply saddened after hearing the news of the landslide.

The Afghan government has also announced a day of national mourning in the country.