The inauguration marks the end of an era with the departure of President Hamid Karzai, the only leader Afghans have known since a U.S.-led invasion in 2001 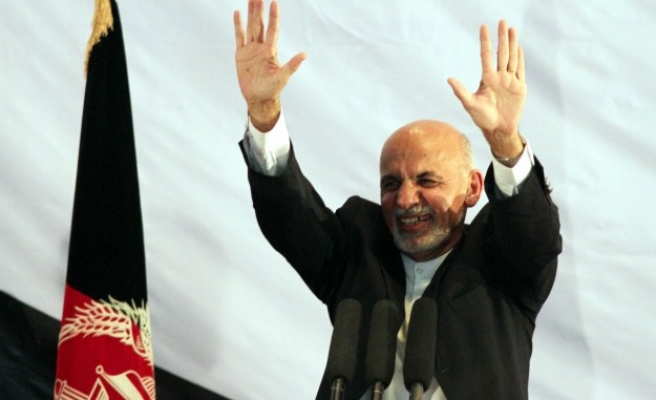 Afghanistan inaugurated its first new president in a decade on Monday, swearing in technocrat Ashraf Ghani to head a power-sharing government just as the withdrawal of most foreign troops presents a crucial test.

The first democratic handover of power in Afghanistan's history has been far from smooth: the deal for a unity government was cobbled together after months of deadlock over a vote in which both Ghani and opponent Abdullah Abdullah claimed victory.

Illustrating the problems facing the new president, a blast on a road near Kabul airport just before Ghani was sworn in caused some casualties, a Reuters witness said. A member of the security forces said a bomber attacked a checkpoint.

Already, there have been signs of tension in the fragile coalition that will run the country. A dispute over office space and whether Abdullah would speak at the inauguration led to threats his camp would boycott Monday's ceremony, an Abdullah aide said.

Ghani's first act after being sworn in was to sign a decree creating the post of chief executive. Abdullah was sworn in to that job moments later, and he made a speech before Ghani - a departure from the original programme.

The inauguration marks the end of an era with the departure of President Hamid Karzai, the only leader Afghans have known since a U.S.-led invasion in 2001 overthrew the Taliban.

Already-tight security was stepped up around the capital, Kabul, ahead of the inauguration for fear Taliban insurgents might try to disrupt the ceremony or attack international dignitaries who flew in to attend.

In his inaugural speech, Ghani appealed to the Taliban and other militants to join peace talks and put an end to more than a decade of violence.

"Security is a main demand of our people, and we are tired of this war," Ghani said. "I am calling on the Taliban and Hezb-i-Islami to prepare for political negotiations."

Hezb-i-Islami is a faction loosely allied with the Taliban.

Ghani also vowed to crack down on rampant corruption and called for cooperation within the coalition government.

"A national unity government is not about sharing power, but about working together," Ghani said in his speech that lasted for nearly an hour.

Both foreign backers and Afghans hope that Ghani and Abdullah can put aside their acrimonious election rivalry and work to improve life in a country that has suffered war and poverty for decades.

"We expect both to fulfil the promises they made to the people," said unemployed Kabul resident Mohammad Sharif. "We, the people of Afghanistan, are monitoring their performance to see whether they can serve the people or not."

The dispute over Abdullah's speech and the office space was resolved after late-night meetings with the U.S. ambassador, the Abdullah aide said.

Even if its top figures can work together, the new government inherits massive problems, including fighting an emboldened Taliban who in recent months has been launching ever more aggressive attacks as foreign troops draw down.

Ghani must also reset relations with the United States, which have soured in recent years under Karzai. One of Ghani's first acts as president is expected to be signing a bilateral security agreement to allow a small contingent of U.S. forces to remain to train and assist the new Afghan army and police.

Karzai has refused to sign it, but both Ghani and Abdullah are in favour of signing it promptly.

The inauguration ceremony was held at the vast presidential palace compound in central Kabul. Foreign dignitaries including Pakistani President Mamnoon Hussain and senior White House adviser John Podesta were due to attend.

Another early act for Ghani is expected to be appointing Abdullah as chief executive of the new government, an expanded post with powers similar to those of a prime minister that was created to break the election deadlock.

The new government will immediately face a fiscal crisis. Already heavily dependent on foreign aid, Kabul has asked the United States and other donors for $537 million to pay its bills until the end of the year.

A Finance Ministry official acknowledged over the weekend that the government is so broke that it has been forced to delay paying civil servants' salaries for October because the treasury does not have the $116 million needed.

Some hope that Ghani, a longtime World Bank official and former finance minister, will put his knowledge of international institutions and development to work in combating Afghanistan's tradition of corrupt and inefficient government.

A U.S.-trained anthropologist from Afghanistan's Pashtun ethnic group, Ghani spent almost a quarter of a century outside Afghanistan during its tumultuous decades of 1980s Soviet occupation, followed by civil war and Taliban rule.

After the Sept. 11 attacks, he returned to become a senior adviser to newly appointed leader Karzai.

Abdullah remained in Afghanistan during the years of war as a close confidant to the anti-Soviet and later anti-Taliban fighter Ahmad Shah Massoud, an ethnic Tajik commander who was assassinated in 2001.

If Ghani and Abdullah can work together well, they could help bridge longstanding ethnic and political divides in Afghanistan, although sceptics fear the coalition will inevitably be caught up in power struggles and rivalries between entrenched interests.