Afghanistan looks towards China for economic, security support as it plots a path towards peace 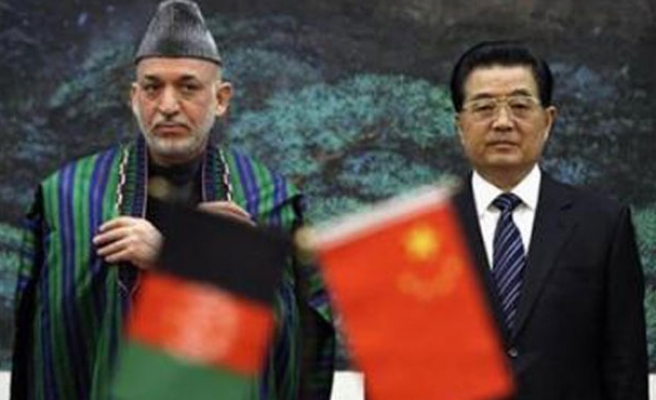 As neighbors, Afghanistan and China share much of their history and with both countries marking the 60th year of their diplomatic relationship this week, experts believe their partnership is on the verge of entering a new era.

One of the symbols of the relationship is the Chinese-Pashto dictionary. The 78-year old Chinese linguist Professor Che Hongcai spent 36 years completing it, and was gifted the first copy by Afghan President Ashraf Ghani at a ceremony in Kabul's presidential palace this week.

Ghani used the event to build on extensive talks held with the Chinese leadership in Beijing in September last year, expressing his hope that Beijing could play a proactive role in the Afghan peace process.

"Now as China has stepped in, we will be witness to sufficient measures for peace and stability, which is not in the interest of Afghanistan only but of China and the entire region," he said Tuesday after honoring Professor Che with the Sayed Jamaluddin Award -- a prestigious state medal named after a 19th century Islamic scholar who, in the face of colonialism, attempted to forge closer ties between Asian nations.

China's strategic ties with Afghanistan have historically been limited; lying somewhere in between its close alliance with Pakistan and reserved relations with India.

Davood Moradian, director of the Afghan Institute for Strategic Studies, believes however, there has been a significant shift in Sino-Afghan ties recently.

"It seems as if the Chinese government has linked its internal security policy with the stability in Afghanistan," he said, highlighting a perceived potential threat of a spill-over of militancy towards northwestern China’s restive Muslim-majority Xinjiang province.

For the first time since the arrival of NATO forces in Afghanistan over 13 years ago, Beijing has shown willingness to play its role in bringing the militants to the negotiation table. There have been reports about a Taliban delegation visiting Beijing earlier this month, together with Pakistani officials.

In the eyes of Moradian, China has always been friendly towards Afghanistan but the latest shift to a more proactive role is a "blessing."

He warned, however, that the Kabul government must maintain a necessary balance in its ties with Beijing.

"We have signed a Strategic Bilateral Agreement with the U.S. and are a longstanding ally of India as well, so whatever moves we take we must make sure not to send wrong signals," he said.

"The modern world is no longer netted by ideologies, it is linked by mutual interests," he said. Patman noted that the interests of the U.S. and China in Afghanistan do not conflict but instead converge.

"The U.S. wants Afghanistan not to turn into a base for terrorist attacks on America, while peace and stability is something the Chinese are striving for," he said.

Patman stressed that Ghani approached Beijing with the clear intention to invite them to strive for mutual and, ultimately, regional economic gains.

Regarding Pakistan’s influence over the Taliban and its alleged export of terror to Afghanistan, he claimed this could also change for good if Kabul manages to convince Islamabad, through China, that Afghanistan means no harm to Pakistan.

Beijing and Kabul have been busy exploring new trade routes and chalking out plans to revitalize a more historical one; the ancient Silk Route.

Afghanistan’s enormous untapped mineral reserves are said to be another reason for Chinese interest. According to the U.S. Geological Survey, the country is said to be sitting on a mineral wealth worth trillions of dollars.

In 2007, two of China’s state-owned enterprises initiated a $3 billion deal to develop one of Afghanistan’s untapped mineral sites, a 5 million-ton copper deposit roughly 20 miles from Kabul. China has also pledged to provide annual grants of more than $300 million over the next three years.

"Today Afghanistan and China are not only going to open a new chapter in their cooperation, but to write a whole joint book -- a book on Asia’s reconstruction," the Afghan president told a gathering marking the 60th year of bilateral ties. "Over the next 20 years, Asia will serve as the world’s economic hub, as it had been three centuries ago."