If one mentions “to forget or to ignore” somewhere as Muslim World, the first thing we would think of must be Kashmir. Therefore we have to remind Kashmir the most 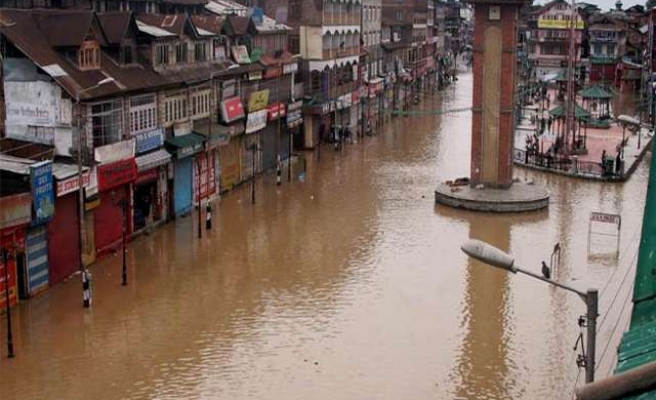 My previous interview was about “to be a student in Gaza”.  I just wanted to remind that the misery and demolition is still going on there even though we share their pain and feelings for a short while and then get it out of our minds. And I just wanted to remind that we have still responsibility for hem. Of course everyone lives with their own pain but can’t we push ourselves so as to become more sensitive at least? Is not it our duty to take at least a short break from our daily life tempo and remember them?

If one mentions “to forget or to ignore” somewhere as Muslim World, the first thing we would think of must be Kashmir. Therefore we have to remind Kashmir the most. Again, in solitude Kashmir has been fighting against huge troubles and crisis for 3 months. Thousands of people are still struggling to survive. The flood disaster, which occured in September, has demolished Cammu-Kashmir entirely. Elhamdulillah, somehow, our news agencies could release the news about it and inform us. Yet, we just gave a look and the passed it. Most of us could not even notice because of our “busy agenda”. But there is a huge disaster and tragedy there, much more than we could realize…

Anyway I do not like keep repeating cliche complaints and I just want to remind Kashmir if I could remember. I do not claim that I am so sensitive too but due to my valuable Kashmiri friends, who has witnessed all disasterand  given huge effort for rescuing people, I could see and feel the tragedy more. I heard the stories from the source. And now I want to express their voice to you.

Here is my interview with dear friend Muzzammil Ayyub Thakur, who is Kashmiri activist and International Ambassador of Kashmir:

- When did the flood happen Muzzammil? And how much did it effect on Kashmir?

Total deaths are around 1000 but homes destroyed are over 400,000. Injuries also in hundreds of thousands. $17 billion in damages.

- Flood equals plague and disease... Is there this problem now in Kashmir?

The major concern for diseases was cholera and other infections. Many places still have the problem of diseases because they are hard to reach. Especially those who were helping in flood relief and rescue, they spent too much time in contaminated water and are worst affected. People's homes are also infected and need disinfection.

- We know that Kashmir's infrastructure was already not well. How is it currently?

There are many villages that no longer exist. With 17 billion dollars worth of damage you can imagine the destuction to infrastructure, people's livelihoods especially those who were farmers.

- What is Kashmir Parliament is doing? Can they handle the situation?

The budget that India has said they will provide to Kashmir is only 10% of total need. And not one single penny has been given yet. 17 billion dollars of damage and no funds have been released to those affected. It is only donations and volunteers who are helping the poor people to survive.

- What is the biggest lacks after the flood? What do the Kashmiri need urgently?

Right now Kashmiris need shelter. Food. Clothes. Blankets. Winter is coming and it gets very cold so those people affected cannot survive without the basic needs. Also those people who lost their animals and farms needn't be helped to survive and earn money for their families. Hospitals are in bad condition and schools too. Students have lost their  books and uniforms and cannot study. We must also remember the orphans and widows. No one is there to look after them. They need alot of help too.

- How are you co-operating with Kashmir government so as to fix infrastructure? Can you say that there is good solidarity on the ground?

There is very food network and solidarity on the ground between civil society and volunteers but their work is limited because of funds but also because of registration. To get funds and work u must be a registered organisation and there are not that many who are registered. Especially registered for flood relief. Some are only allowed to work on education. Others on children. But for floods there is only one organisation. It has the support from everyone but biggest obstacle is funding to really make a difference.

- What did just after disaster? How did you help?

As soon as I heard about the flood I started to campaign for funds. I have some experiment in fund raising and generated some food amount of money. I left my job and went to India and Kashmir to help in the relief and rescue efforts. We made a team and had nearly 1000 volunteers working with us and we were sending 10,000 kilos of relief and aid everyday for 2 weeks. It was the miraclenof these volunteers as most were only students, very young boys and girls would did a wonderful job. Without them nothing would have been possible. No political, no publicity, just pure worm 24 hours a day.

- Who has been helping you from all around the world?  What about Turkey or Turkish NGOs?

We spoke to different NGOs and charities internationally and some diplomats. Biggest problem was that India did not and still does not allow international aid agencies into Kashmir so hardly anyone could come and help. Some local Indian charities did some work but it did not last for very long. Their efforts are appreciated but sadly did not make a huge difference.

Some NGOs have a working relationship with existing charities like some turkish ones. But the problem is they are working with small charities Who do not have that many volunteers or not registered the right way. There is lack of professionalism in Kashmir which is why young Kashmiri professionals are trying to lead the way to show everyone how to work properly and show accountability. We must be responsible for every penny we spend and more importantly, maintain a database of who has been helped so that the work is not duplicated. This is something we are still trying to work on and explain this to the international charities working with local charities in Kashmir.

- Did the global media pay their attention enough for the flood or were they blind as usual?

The world barely took any notice. I mean even the British media was lobbied and they only said one sentence about Kashmir flood. Nothing else. We even contacted the foreign office to tell them British nationals were stuck in Kashmir and we don't know if the are safe. It is the responsibility of the government to protect and help it's citizens but the British government and American government said they could do nothing. Even world media was quite. As usual.

- Any last message? What can people do now for you?

Right now what is needed is help. India will not allow international sid like blankets and food and medicine but if people can donate, we can buy things locally here and provide people with help. Now is the time to show the people of Kashmir you care. That we are part of one Ummah. If not now then we should question our faith. Question are we really Muslims. We help Syria and Palestine and Iraq etc but why not Kashmir? Today we are also cold and hungry and sick. Will  no one help us or is help only for Arabs?