Ahmadinejad 'warned' ahead of UN visit

An Iranian official who asked not to be named said Khamenei's allies had warned Ahmadinejad to avoid vitriolic speeches at the United Nations. 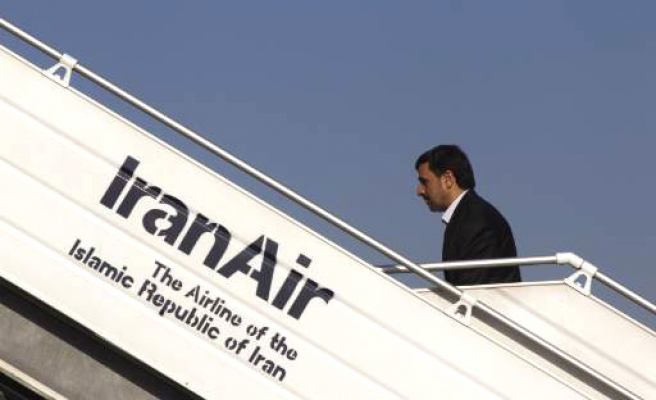 Iranian President Mahmoud Ahmadinejad headed for the annual U.N. General Assembly on Monday with little scope for effective diplomacy, weakened by rivals at home manoeuvring to prevent his words to the world being taken as Tehran's official stance.

Trying to divert attention from his fading standing in the Islamic Republic, Ahmadinejad told U.S. media on Tuesday the two U.S. citizens recently sentenced to eight years in prison for alleged espionage would be freed "in a couple of days".

But Iran's judiciary, controlled by rival conservatives, immediately and publicly humiliated Ahmadinejad by ruling out any imminent release of Shane Bauer and Josh Fattal, highlighting the president's deepening credibility deficit.

"Hardline rulers have taken the gloves off against Ahmadinejad ... by delaying the release of the Americans ... The establishment showed that Ahmadinejad is a lame-duck president," said political analyst Hasan Farzi. "Such a weak president is unlikely to be able to achieve any diplomatic breakthrough while meeting world leaders in New York."

Iranian politicians, influential clerics and the elite Revolutionary Guards, who quelled anti-government outpourings in the streets after Ahmadinejad's disputed 2009 re-election, have distanced themselves from the president over his challenging of the authority of Supreme Leader Ayatollah Ali Khamenei.

Ahmadinejad has suffered a series of dramatic setbacks in his power struggle with Khamenei. In the past months at least 25 allies of Ahmadinejad have been arrested and several websites affiliated with them have been blocked.

His closest ally, Esfandiar Rahim Mashaei, has been accused of graft, leading a "deviant current" that seeks to challenge the establishment, and links to a $2.6 billion bank fraud described as the biggest financial scam in Iran's history.

Ahmadinejad has rejected the accusations against his allies and Mashaei is accompanying the president on his U.N. trip.

When Khamenei reinstated Ahmadinejad's sacked intelligence minister in April, the president refused to go to his office for 11 days but lost the battle after Khamenei signalled that he might be dismissed.

An Iranian official who asked not to be named said Khamenei's allies had warned Ahmadinejad to avoid vitriolic speeches at the United Nations.

"Even if he gives fiery speeches or again calls for Israel to be wiped off the map, these words should not be interpreted as the views of hardline rulers," said analyst Hamid Farahvashi.

"The warning was given to prevent any bitter surprises ... that could put more pressure on the country and its leadership," he said. "But Ahmadinejad is unpredictable."

"The main issue for Khamenei is preserving the establishment when all these regime changes are taking place in the region," said Farzi.

Iranian opposition leaders Mirhossein Mousavi and Mehdi Karoubi have been put under house arrest since February to minimise prospects for any unrest. But the leaders insist the pro-reform movement is still alive.

Some analysts say Ahmadinejad's efforts to release the U.S. citizens could be aimed at refurbishing his international image.

"Ahmadinejad can claim that his efforts to build better ties with the world failed because of his hardline rivals," said analyst Hamidreza Bokharai.

"Any kind of backing by the West can strengthen Ahmadinejad's position in Iran," he said, because many Iranians want the Islamic Republic to open up to the West.

A political constellation of conservative elites has crystallised against Ahmadinejad, analysts say, to block his camp winning upcoming elections.

"Hardliners have aligned to block Ahmadinejad's allies to win the parliamentary election in March, which will be a litmus test for Ahmadinejad's popularity," said analyst Reza Sedghi.

"(However), he still enjoys the support of lower-income Iranians ... Ahmadinejad is like Robin hood for some Iranians because of cash handouts by the government."