Anger mounts in Kashmir after worst flood in over century 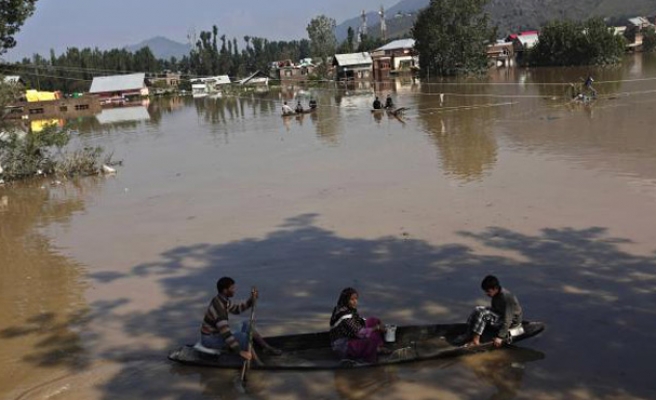 Residents of revolt-torn Indian-held Kashmir turned their wrath on state administrators for failing to provide them with succour after the worst flooding in over a century, angrily dumping food parcels into gutters.

A week into the disaster, large parts of Srinagar, the capital of Jammu and Kashmir, lay under water with many people still trapped atop their homes, and others crowded in relief camps.

Their misery has added to problems of the administration in a Muslim-majority region where a revolt against Indian occupation has simmered for nearly a quarter century.

Many complain that the government, which has maintained a heavy presence in the territory to keep a lid on the revolt, has left them to their fate.

Residents stranded for days by the floodwaters said that the army has selectively evacuated tourists and people according to a pre-set priority list, leaving locals to be rescued later by volunteers.

"Helicopters came, and we waved our arms," said Aasiya Kutoo, who was living at a temporary shelter. "Nobody came for us. Nobody in our area was rescued by air."

Outside one mosque-turned-camp in Srinagar, food supplies dropped earlier in the day by a military helicopter were strewn in a gutter, rejected.

"People said we don't need this government food," said Nayeem, who lives in the neighbourhood. He said since the state of India occupied Kashmir, they were only providing relief out of duty. "If another state occupied this land, they would be bound to do the same."

Both the Indian and Pakistan sides of the disputed Himalayan territory have been hit by extensive flooding since the Jhelum river, swollen by unusually heavy rain, surged last week. The river flows from Indian-held Kashmir to the Pakistan side, and then down into Pakistan's lower Indus river basin.

The Indian government has put the death toll at 200 in the part of Kashmir it controls but there are fears that number will rise as the damage to Srinagar, a city of one million, and villages in southern Kashmir is fully revealed.

Many residents are deeply resentful of what they say has been a complete absence of their local government and police in the wake of the disaster.

Others drew a comparison to the thousands of police the Indian state has deployed in the past to put down public protests against Indian rule, but were now nowhere to be seen.

"If there is a single stone pelted, there are a hundred police out beating one person," said Megha Dar, a teacher living in a temporary camp. "Where are they now? Where are the ministers?"

Hundreds of thousands of Indian soldiers are deployed in the Kashmir Valley, where the army says it has succeeded in putting down the armed groups that it believes are supported by Pakistan.

A senior army official said it was unfortunate that the rescue effort had been politicized. "Our air force does not permit selective rescue," he said. "The population has been affected by a tragedy. This reaction is a reflection of their lack of faith in the civic administration."

A new generation of young Kashmiris, who have grown up with house raids and army checkpoints, feel increasingly angry at Indian rule and champion street protests rather than the violent militancy that characterized the 1990s.

Several government employees decried that basic needs were not being met in the capital. Two government doctors said public hospitals were understaffed, and short on basic supplies and medicine.

"The local government is totally crippled," added Riyaz Ahmad, an officer with the labour department, who was volunteering at a civilian-run relief camp. "There has been no communication from my superiors. Every department is totally defunct."

Jammu and Kashmir Chief Minister Omar Abdullah said the severity of the floods had knocked out his administration in the first few hours itself. But it had since recovered and was trying to do its best to deliver aid.

He said part of the problem was people did not heed flood warnings broadcast from government vehicles and mosques last weekend.