Another death in police firing during funeral of Kashmiri victim

One person was killed in Kashmir when police opened fire on a crowd defying a curfew to participate in the funeral of a protester who were killed by police. 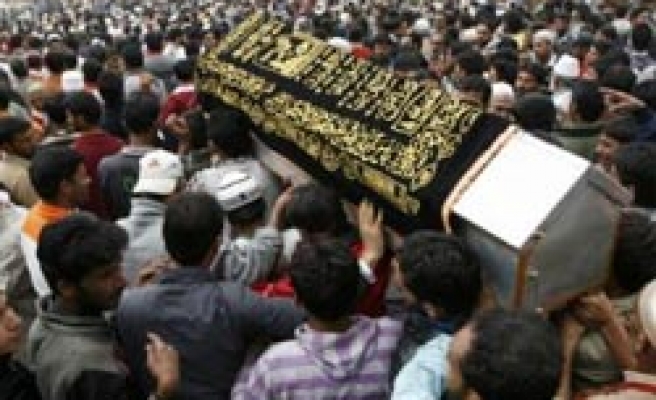 One person was killed in Kashmir on Saturday when police opened fire on a crowd defying a curfew to participate in the funeral of a protester who were also killed by police in an anti-India rally, police and witnesses said.

Indian troops killed at least 100 people demanding the Muslim region be given independence from Hindu-dominated India in the three-month old protests, the biggest since an armed pro-independence move against New Delhi's rule broke out in 1989.

"It was an unprovoked firing. We were peacefully shouting slogans and carrying the body for funeral," Sahil Bhat, a witness told Reuters over phone.

Earlier this week Prime Minister Manmohan Singh, facing with criticism that he was allowing the civilian killings, held a meeting with his allies and opposition parties. The only decision taken was to send a delegation of politicians to Kashmir.

A cycle of strikes and protests has crippled normal life in the valley and most parts of Muslim Kashmir, has been under curfew for the last three months.

Indefinite curfew continued in all major towns across the valley for the sixth consecutive day Saturday with many residents of Srinagar complaining of shortages of medicines, baby foods and cooking gas.

The valley has been under curfew since 18 people were killed in police firing, Sep 12.

“This is India’s last resort,” said Mirwaiz Umar Farooq, a top separatist leader. “What we’ve been repeatedly saying should now be clear to all, that this place is under martial law.”