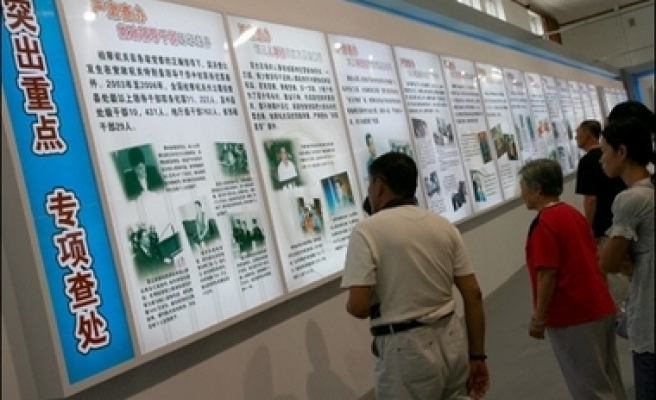 The new leadership of Chinese government launched one of the most intense anti-corruption campaigns in decades. Within this framework, Bo Xilai, once the most potent challenger to the current Chinese Communist Party leadership, was sentenced to life in prison for corruption on Sunday.

The Central Commission for Discipline Inspection (CCDI) of the Communist Party of China and the Ministry of Supervision (MOS) unveiled a process for handling comments and complaints from the public, in a bid to help whistle blowers better cooperate with disciplinary organs.

The Chinese officials are adopting more channels such as internet to strengthen anti-corruption efforts.

Some Chinese citizens argue that this is a political purge against a potential rival to the new regime but many people believe this marks a success in the anti-corruption campaign.

"This sentence has provided China's political elite to understand that they would be punished if they corrupt," Sao Minmin, a Chinese national told Anadolu Agency (AA).

Cu Thig, another Chinese national, described the recent crackdown in the country as a power of social media, saying "'Hiding everything from people's era is ending."

"Our leader [president Xi Jinping ] is not just talking, he is making real at the same time. He is working as hard as he can not to destroy people's hopes and expectations," Tan told.

64 year-old Communist Party official Bo Xilai was charged with receiving bribes of about $4 million from businessmen in Dalian, where he had been mayor, embezzling public funds and covering up the killing by his wife of a British expatriate,Neil Heywood, with whom she had a business dispute.

His corruption had been exposed after a photograph of him smiling at the scene of a fatal road accident and then a series of photos showing him wearing luxury watches were posted.