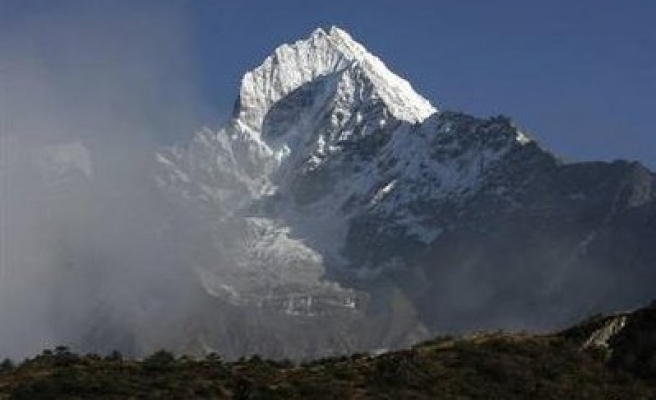 An avalanche swept down a slope of Mount Everest on Friday killing 12 Nepali mountaineering guides at the beginning of the main climbing season, a Tourism Ministry official said.

The avalanche, the deadliest in eight years, hit the most popular route to the mountain's peak. Three Nepali guides were injured and up to five people were missing, said Dipendra Paudel at the Tourism Ministry's mountaineering department.

It was the first major avalanche on Mount Everest this climbing season, when hundreds of foreign and Nepali climbers flock to the mountain to attempt to reach its 8,850 metre (29,035 feet) peak.

The avalanche hit the sherpa guides relatively low on the mountain, between base camp and camp 1, early on Friday, ministry officials said.

Helicopters and rescuers on foot had been sent to the site, said senior ministry official Madhusudan Burlakoti.

More than 4,000 climbers have scaled Everest's summit since it was first climbed by Sir Edmund Hillary and Tenzing Norgay Sherpa in 1953. The route they took is the one hit by the avalanche on Friday.

Nearly 250 people have died on the mountain.

Everest is on the border between Nepal and the Chinese region of Tibet and can be climbed from both sides.

Nepal's Tourism Ministry has issued permits to 334 foreign climbers to scale Mount Everest this season, up from 328 the whole of last year. Nepal plans to cut fees to climb the mountain despite concern about overcrowding.

An equal number of sherpa guides also climb the mountain to help the foreign mountaineers. They often go ahead of the foreign climbers, preparing the way by fixing ropes and setting up camps.

The climbing season usually ends in late May when rainy season wind and cloud push up from the south to cloak the Himalayas, making climbing at high altitudes virtually impossible.

Nepal is home to eight of the world's 14 highest peaks.