At least one million Pakistanis cut off by landslides

Poor weather has grounded relief helicopters and more rain was expected to compound the misery of more than 13 million people. 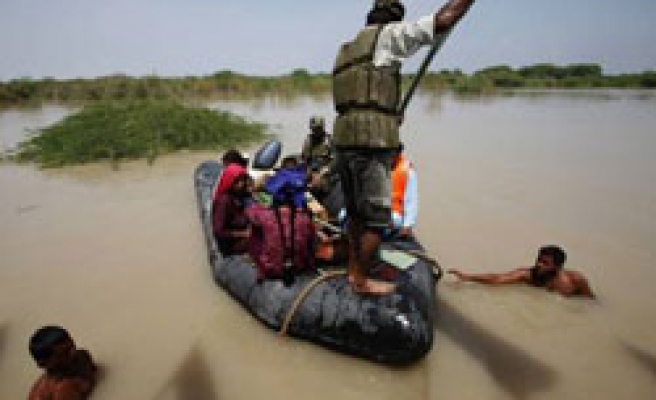 Soldiers and aid workers struggled on Monday to reach at least a million people cut off by landslides that have complicated relief efforts after the worst floods in Pakistan in 80 years.

Poor weather has grounded relief helicopters and more rain was expected to compound the misery of more than 13 million people -- about 8 percent of the population -- whose lives have been disrupted by the floods, including two million homeless.

The floods have killed more than 1,600 people.

In the Swat Valley, northwest of Islamabad, soldiers and aid workers are using mules or travelling on foot to reach people in desperate need of help.

The catastrophe has put President Asif Ali Zardari on the defensive while raising the profile of the military which is spearheading relief efforts.

The floods, which began 10 days ago after heavy monsoon rain over the upper reaches of the Indus river basin, have ploughed a swathe of destruction more than 1,000 km (600 miles) long from northern Pakistan to the southern province of Sindh.

While the water has begun to recede in some parts of the north, water-logged mountainsides long stripped of forest cover have begun to slide in some areas, isolating communities.

"We have brought in 130 mules to take food supplies to the cut-off valleys," an army spokesman in Swat, Major Mushtaq Khan, told Reuters, adding that bad weather had grounded helicopters for the past two days.

"About one million people are stranded because the main road link has been severed ... We believe that most stocks villagers had, have been exhausted and they need supplies."

The United Nations said in terms of the number of people who have lost their homes or livelihoods, and will need short- or long-term help, the floods were worse than the 2004 tsunami, which killed 236,000 people around the Indian Ocean.

In Punjab province, army helicopters rescued people and their livestock from rooftops in Mehmood Kot village, a scene being played out in many parts of the country.

Some soldiers are getting frustrated by people's reluctance to leave their homes.

"When we try to take them, they say they don't want to leave and instead they demand food. We have to fly again to bring food. This is a major problem for us," Lieutenant Colonel Salman Rafiq said.

One woman gave birth to twin boys in her flooded house in the town of Sanawa. Neighbours carried the woman and her babies on a rope bed through the flood to a helicopter.

Heavy rain has also hit India where military helicopters plucked about 150 foreign tourists to safety in the Himalayan region of Ladakh where flash floods have killed 156 people.

In the southern province of Sindh, which has yet to see the full force of the deluge flowing south to the sea, up to one million people have been evacuated from low-lying areas.

"US concerns amid floods"

Zardari's decision to go ahead with official trips to Europe during the crisis has renewed criticism of his leadership. The military has taken the lead in relief efforts while the government is under fire for perceived dithering.

U.S. officials are also "concerned" about the damage caused by the weak government response to the floods and mounting hostility toward Zardari.

Pakistan is an element that US uses to get rid of local fighters who support Taliban forces fighting against foreign troops invading nearby Afghanistan.

The president is expected back by mid-week.

U.S. concerns are also growing over the disaster's impact on Pakistan's fragile economy and how Washington's "development plan" may be slowed down to deal with the crisis.

Pakistan's economy will need huge injections of foreign aid. Hundreds of millions of dollars in humanitarian relief will be needed over the next few months alone.

Pakistan turned to the International Monetary Fund in 2008 to avert a balance of payments crisis and has been struggling to meet the conditions of that $10.66 billion emergency loan.