10 to 15 militants attacked a NATO convoy carrying supplies from Pakitan to Afghanistan. 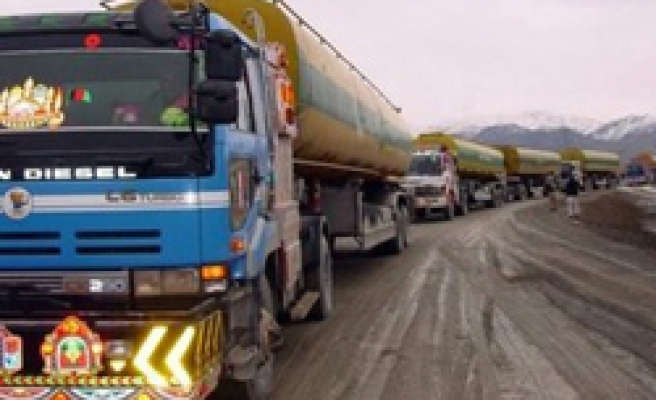 Two people were killed on Thursday in an attack on a NATO convoy carrying supplies from Pakistan to Afghanistan, officials said.

Speaking to the Anadolu Agency on condition of anonymity, a security official said 10 to 15 fighters attacked a convoy of three containers.

"The militants unleashed gunfire on the containers killing two drivers on the spot and injuring three crew members, who are stated to be in critical condition," the official said.

The attackers fled after setting the three containers on fire. Eyewitnesses told local media the containers were carrying military vehicles.

The attack in Khyber Agency near the Afghanistan border is the biggest in the last year. Fighters have usually attacked single containers, rather than convoys, in small hit-and-run attacks.

No group has yet claimed responsibility but the security forces believe the Taliban, who have carried out numerous similar attacks before, may be responsible.

Alongside Khyber Agency, southwestern Balochistan districts Bolan, Khuzdar, Chaghi, and Naseerabad have been hotspots for attacks on NATO convoys that have killed more than 30 people in the last seven years.

NATO ships 70 to 80 percent of its supplies for Afghanistan through the northeastern Torkham and southwestern Chaman borders. NATO says alternative routes through central Asian states to Afghanistan costs six times as much as the Pakistan borders.