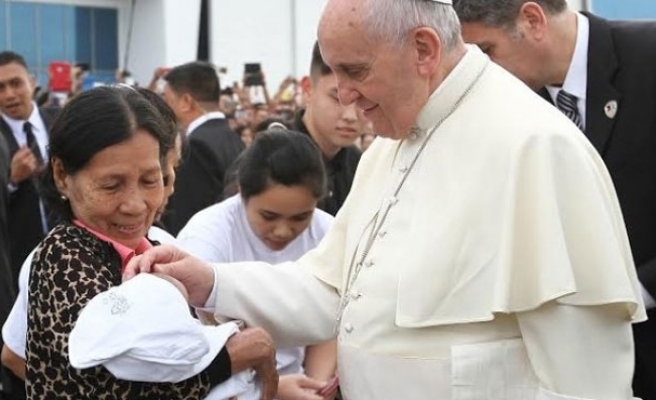 Philippine police received information that one of Southeast Asia’s most wanted gunmen was planning to attack the pope during a recent visit to the country, military officials said Tuesday.

A spokesman for the Armed Forces of the Philippines said information was received on a bomb plot by Zulkifli bin Hir, alias Marwan, and other Jemaah Islamiyah members during Pope Francis' five-day visit to the islands last month.

Col. Restituto Padilla Jr. told GMA News that Marwan, who was killed in a police operation on the southern island of Mindanao six days after the pope left Manila, planned to bomb the papal convoy during the Jan. 15-19 visit.

"We got wind of this piece of info but this was unverified and unconfirmed," Padilla said. However, security for the visit was altered to take the alleged plot into account.

"Planning adjustments were made in consideration of this and to ensure protection of the pope," Padilla added.

Marwan’s death was reportedly confirmed by DNA comparison to his brother, who is being held in Guantanamo Bay, after police commandos cut off a finger during the Jan.25 raid in Mamasapano township, Maguindanao province.

The Malaysian, who had a $5 million FBI bounty on his head, had previously been reported killed in a 2012 airstrike in Jolo -- a stronghold of Abu Sayyaf insurgents in the Philippines' southern Sulu archipelago -- only for those claims to be retracted.

He was a leading figure in Jemaah Islamiyah, the al-Qaeda-linked Southeast Asian group behind the 2002 Bali bombings in Indonesia, and had reportedly been hiding out in southern Philippines for more than a decade, passing on his bomb-making skills to militants in the region.

On Monday, the Senate heard from Getulio Napenas, who was relieved of command of the Philippine National Police's Special Action Force after the Mamasapano operation, which resulted in the deaths of 44 police commandos.

He told lawmakers the police had received unconfirmed information that the Jemaah Islamiyah, in coordination with Marwan, had planned to detonate a bomb as the papal convoy drove to an outdoor mass at Rizal Park on Jan. 18.

"These reports were not confirmed and neither admitted nor denied by the Philippine National Police but the fact, however, remains that there exists this information," he said.

An estimated six million Filipino Catholics attended the mass at the Rizal Park.

Napenas also told the Senate hearing that police have received reports of dozens of Marwan’s students at large in central Mindanao "ready and willing and able to create widespread fear and terror."

Presidential spokesman Edwin Lacierda, quoting National Security Adviser Cesar Garcia, said in a statement that there was no specific report on the alleged bomb plot, adding that the threat had been assessed as “minimal.”