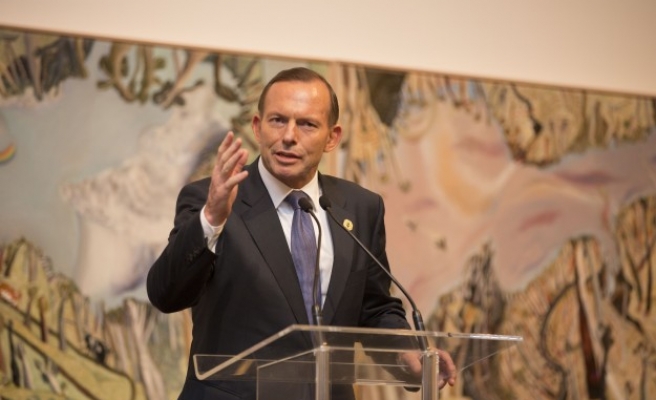 Australian special forces troops will be deployed in Iraq to assist in the fight against ISIL militants, Prime Minister Tony Abbott said on Friday, and its aircraft will also join U.S.-led coalition strikes.

Abbott said in a nationally televised news conference the Australian troops would be engaged in an "advise and assist" capacity to support the Iraqi army in their battle against the militant group.

The United States has been bombing ISIL and other groups in Syria for almost two weeks with the help of Arab allies, and hitting targets in neighbouring Iraq since August.

European countries have joined the campaign in Iraq but not in Syria.

Last month, Abbott sent aircraft and 600 personnel to the United Arab Emirates in preparation for joining the coalition. He has since said it was likely Australian aircraft would join the strikes to combat ISIL, which he described as a "murderous death cult".

While the involvement of Australian aircraft had been flagged, the use of Australian troops on the ground in Iraq was not as widely anticipated.

"Today, cabinet has authorised Australian air strikes in Iraq at the request of the Iraqi Government and in support of the Iraqi government," Abbott said.

"Also, subject to final legal documentation, cabinet has authorised the deployment of Australian special forces into Iraq to advise and assist Iraqi forces."

So far Australian aircraft have been limited to humanitarian aid and delivering arms to Iraqi government-backed forces.

Australia is on high alert for attacks militants returning from fighting in the Middle East, having raised its threat level to high and undertaken a series of high-profile raids in major cities.

Officials believe up to 160 Australians have been either involved in fighting in the Middle East or actively supporting groups fighting there. At least 20 are believed to have returned to Australia and have been said to pose a security risk.

One man was charged on Tuesday with funding a terrorist organisation, while another was arrested last month after police said they had thwarted a plot to behead a randomly selected member of the public.

Prominent Australian Muslims say their community is being unfairly targeted by law enforcement and threatened by right-wing groups, and there are concerns that policies could create a backlash.

Abbott said ISIL poses a grave threat to both Australia and the wider world and that Canberra could not afford to shirk its responsibility to contribute militarily to "degrading" the group's capabilities.

"The Americans certainly have quite a substantial special forces component on the ground already," he said.

"My understanding is that there are U.K. and Canadian special forces already inside Iraq, so we'll be operating on a much smaller scale but in an entirely comparable way to the United States special forces."

The Australian contingent in the UAE is made up of eight Super Hornet fighter jets, an early warning and control aircraft, an aerial refueling aircraft, along with 400 air force personnel and 200 special force soldiers.