Within hours of the attack on the Lindt cafe in the centre of the city, a Muslim group reported that women wearing the hijab had been spat on and far right calls of protests 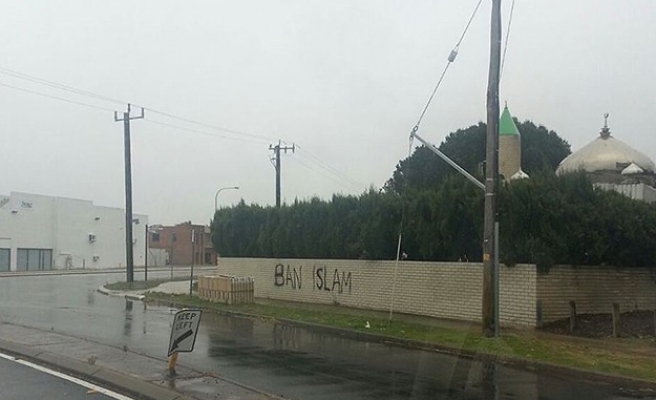 Hours after a mentally unstable man and two of his hostages were killed in a gun battle in a Sydney cafe, inflaming anti-Muslim sentiment in Australia's biggest city, a social media movement showing solidarity with Australian Muslims was gathering steam.

Inspired by the Twitter hashtag "I'll ride with you", some commuters heading into the city for work on Tuesday gave their support to Muslims who might feel vulnerable amid concerns about a blowback after the hostage drama.

The hashtag was trending around the world, popping up across Asia, Europe, Africa and North America as it featured in more than 300,000 tweets. Actor Russell Crowe, who grew up in Sydney and keeps a home here, added his star power to the campaign.

On one train headed into the central business district, a young woman had attached a small sign with the popular hashtag to her handbag.

"I wanted to do something and this seemed like something easy and worthwhile," she said, asking to remain anonymous.

The hashtag began trending on Twitter ahead of the evening commute on Monday, sparked by a Facebook post by Sydney woman Rachael Jacobs who described her encounter with a Muslim woman who took off her head covering: "I ran after her at the train station. I said 'put it back on. I'll walk with u'."

That prompted other Sydneysiders to take to Twitter, detailing their bus and train routes home and offering to ride with anybody who felt uncomfortable, using the hashtag "Illwalkwithyou".

On Tuesday morning, Jacobs said she was overwhelmed with the campaign she had inadvertently started: "Mine was a small gesture because of sadness that someone would ever feel unwelcome because of beliefs."

Religious leaders and ordinary Australians sought to defuse communal tensions but within hours of the attack on the Lindt cafe in the centre of the city, a Muslim group reported that women wearing the hijab had been spat on and the right-wing Australian Defence League called on followers to protest at two major mosques.

"We're still getting reports of incidents coming in today," said Samier Dandan, a spokesman for the Australian National Imams Council. "But we are quite encouraged by this campaign. It shows the support of the Australian public and how much of a big heart they possess."

But in the harbourside city, home to half of Australia's 500,000 Muslims, police moved on a man shouting anti-Islamic abuse at the scene of the ongoing siege.

The man strode up to a police cordon and shouted: "Someone is going to die here because of Islam! There is no such thing as moderate Islam. Wake up and smell the coffee."

He was confronted by another man who shouted back: "Muslims are welcome here." Police urged the first man to leave, to a mix of catcalls and claps of support.

New South Wales Police Commissioner Andrew Scipione said he was working closely with community groups and there would be an increased police presence in the city to "ensure that everyone is kept safe".

The Australian National Imams Council, together with the Grand Mufti of Australia, issued a statement saying it "condemns this criminal act unequivocally".

An umbrella organisation encompassing all of the major Muslim groups in the country called for calm and expressed "utter shock and horror".

The group stressed that the black and white flag, displayed by tense hostages in the window of the cafe and juxtaposed against the "Merry Christmas" sign stencilled beneath it, was a statement of faith, not politics.

"We remind everyone that the Arabic inscription on the black flag is not representative of a political statement, but reaffirms a testimony of faith that has been misappropriated by misguided individuals that represent nobody but themselves," the group said in a statement.

News of the hostage drama flashed around Sydney shortly after most of the city had begun the working day, shattering what should have been a quiet Monday in the sunny Australian commercial capital just over a week before Christmas.

Samier Dandan, a spokesman for the Imams Council, said the group had already received reports of women wearing the hijab, or Islamic head scarf, being spat on and harassed.

"We are sending out the message to our community to be vigilant about where they are going because we don't want any incidents to fuel the fire," Dandan said.

Those reports bore out concerns of locals like Mohamad Hasan, a computer engineer who emigrated to Australia from Jordan 20 years ago, who said he was deeply worried that Muslims like his wife could be attacked simply for wearing traditional clothing.

"I am worried because maybe I don't look like a Muslim, but my wife like, (is) wearing a head scarf, so she might be affected by this," Hasan said, speaking a few metres from the scene of the hostage crisis.

"Some stupid people ... think 'this is a Muslim, we should get revenge (on) everyone looking like a Muslim'."

But many Australians took to social media to express their support for Muslims.

The Twitter hash tag "#illridewithyou", expressing support for Muslims who felt vulnerable on public transport in the wake of the siege, attracted tens of thousands of messages of supporters within a few hours.

Kuranda Seyit from the Forum on Islamic Relations said he was generally encouraged by the response of the Australian public.

“There are groups like the ADL that are trying to capitalise upon these issues and I’m sure some politicians will go back to the issues of migration and the burqa,” he said.

“The repercussions will be long lasting and it will be a hard climb back from this for the Islamic community. There is worry in the community, especially among women who are conspicuous in the way they dress.

“But I’ve been very heartened by the reaction of the community. The broader Australian community has come out in solidarity with the online support. It will all be close to the bone in Sydney because two people died, so it will stir up emotions, but I’m confident it won’t lead to major problems.”

Seyit said Monis was a “disturbed person” who “used Islam as a way to get attention”. But he said more needed to be done to connect with radicalised people.

“The problem has been in our face since September 11 but we failed to act, we were complacent,” he said. “We need to understand the causes of radicalisation and deal with it at its deepest root. We need a long-term strategy, empirical research and data and outreach programs.”

Iqbal Patel, former president of the Australian Federation of Islamic Councils, said he was in contact with Monis for a number of months in 2008 and said he appeared “mentally unstable”.

“He was someone who had a warped view of the place of religion in a country like Australia,” he said. “The Australian community has identified that this man acted alone. My heart goes out to the families [of the victims], this isn’t something that should happen at any time. I really hope people won’t use this in any way to make matters worse.

“I think any individual that shares their good intentions with a Muslim woman who wears a hijab and says, ‘I’m with you, please don’t feel intimidated,’ is a good thing. You don’t need to be a priest or an imam to show compassion to the world.”

Iranian-born Monis sought asylum in Australia in 1996, subsequently giving himself the title Sheikh Haron. He was charged last year with being an accessory to the murder of his 30-year-old former wife Noleen Hayson Pal, a mother of two who was allegedly stabbed to death and set alight in April 2013.

The head of the Australian Iranian Community Association, Sam Ghahremin, said Monis was not known to the Iranian community.

“When we found out he was Iranian, we were really sorry about his actions, but he was acting alone and he had a mental problem,” he said. “The community as a whole condemns his actions.

“This is a concern for the whole community but at this stage we are still in shock. I think the Australian people understand that this was the act of an individual.”