Gillard's wafer-thin ruling majority became even more fragile on Thursday after the conservative opposition backed out of a deal over the prized job of parliamentary Speaker. 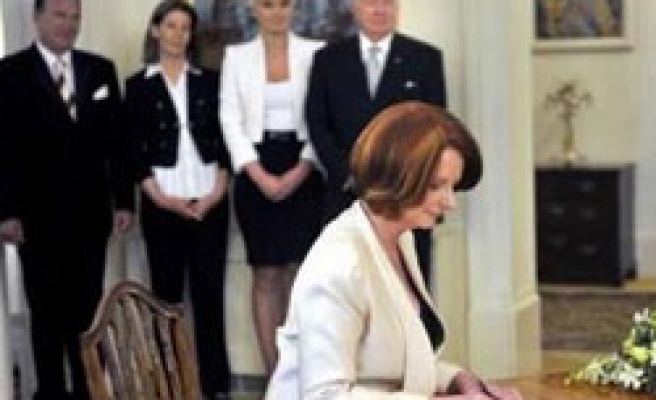 Australian Prime Minister Julia Gillard's wafer-thin ruling majority became even more fragile on Thursday after the conservative opposition backed out of a deal over the prized job of parliamentary Speaker.

Gillard's Labor won a second term with the support of three independents and one Green lawmaker after dead-heat Aug. 21 elections, giving the party control of 76 seats in the 150-seat lower house.

But Gillard must now sacrifice one lawmaker to be non-voting Speaker after the opposition backed down on a deal to ensure the voting numbers would remained balanced, helping ensure stability.

"I view this to be an extraordinary set of events," Gillard told reporters on Thursday.

The development means Gillard will have only one vote to spare in the House of Representatives, further weakening her control of the first minority government since World War Two.

The new parliament will meet on Sept. 28, when Gillard will have the first opportunity to test government numbers in the lower house since the election.

Under a deal signed by the government, opposition and key independent lawmakers in early September, all sides of politics committed to keeping the numbers balanced by granting a "pair" to whoever becomes Speaker.

Under Australia's constitution, the Speaker does not vote in parliament but casts a deciding vote in the event of a tie on controversial legislation. Granting the Speaker a "pair" meant a member of the opposing party would also abstain from voting, ensuring the government would retain its normal majority.

Opposition leader Tony Abbott, who has vowed to try to force a change of government, said on Thursday he backed out of the deal over the Speaker's job because he believed it did not comply with the constitution.

"The first act of every parliament is to choose a Speaker, and it is the first responsibility of government, when parliament resumes, to provide a Speaker," Abbott told reporters.

"If the government is unable or unwilling to provide a Speaker for the parliament, well the prime minister should not have accepted the Governor-General's commission."