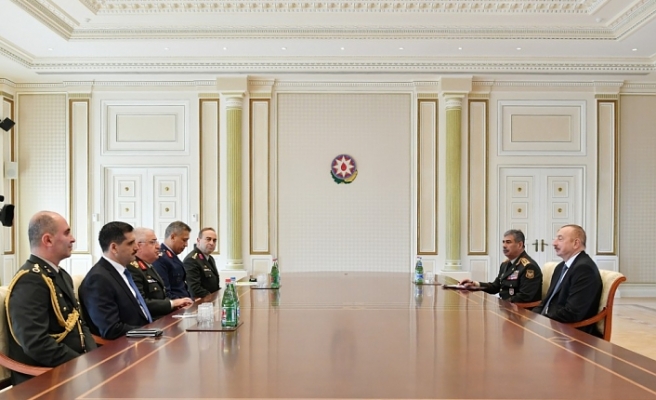 Turkish Chief of General Staff Yasar Guler was received by Azerbaijan’s President Ilham Aliyev on Tuesday, according to the country’s presidency.

According to a statement from the presidency, Aliyev said that the two nations had improved ties in all fields, including military.

Aliyev said that regular meetings between heads of state had played an important role in strengthening relations.

He added that joint military exercises contributed to expanding military cooperation between Azerbaijan and Turkey.

Guler said strategic cooperation between the two countries, which have a shared history and culture, was getting stronger day by day.

Congratulating Aliyev on the 100th anniversary of the liberation of Baku, Guler voiced belief that his country will continue to achieve big in the future.

On Sept. 15, 1918, Baku was liberated by the Caucasian Islamic Army, comprised of Azerbaijani and Turkish soldiers.

Speaking about Karabakh, he said Turkey gave the same importance to the issue as Azerbaijan.

Sadigov informed Guler about the situation in Armenia-Azerbaijan frontline and said Armenia continued its occupation policy.

He added that the solution of the issue would be possible only within the framework of Azerbaijan's territorial integrity and international law.

He is also due to hold a trilateral meeting on Wednesday with Azerbaijani Defense Minister Zakir Hasanov and Georgia’s Chief of General Staff Vladimer Chachibaia.