Babies given away live on air in Pakistani show

"We were told that we had passed all the interviews and had been selected to adopt a baby," said Riaz Uddin, 40, an engineer. "We got our baby on live TV." 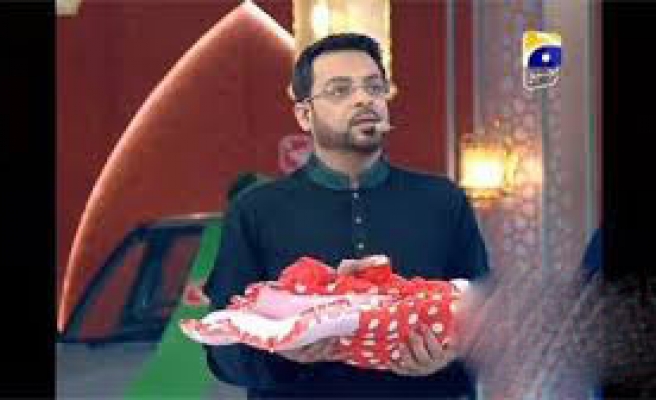 Pakistani television is screening what many call its most controversial content yet in a ruthless quest for ratings: a talk-show host who gives away babies live on air.

Aamir Liaquat Hussain, a bespectacled 41-year-old with a neatly trimmed beard, gave away two abandoned infant girls to childless families last month and plans to give away a baby boy this week.

"If we didn't find this baby, a cat or a dog would have eaten it," Hussain proclaimed during one broadcast, before presenting a tiny girl wrapped in pink and red to her new parents. The audience erupted with applause.

Hussain is one of Pakistan's most popular talk-show hosts. During his marathon broadcasts he cooks, interviews clerics and celebrities, entertains children and hosts game shows.

He usually gives prizes like motorbikes, mobile phones and land deeds to audience members who answer questions about Islam.

But at the beginning of the holy Muslim month of Ramadan, when television stations battle fiercely for ratings, Hussain astonished Pakistan when he presented two families with babies.

"We were told that we had passed all the interviews and had been selected to adopt a baby," said Riaz Uddin, 40, an engineer. "We got our baby on live TV."

The abandoned babies were rescued by the Chhipa Welfare Association, a Pakistani aid organisation.

"In a day or two, the next baby will be given away, God willing," its head, Ramzan Chhipa, told Reuters on Thursday.

While the Chhipa teams scour the garbage dumps and other sites for discarded newborns, Hussain is also appealing for babies directly.

"If any family cannot afford to bring up their new born baby due to poverty or illness then instead of killing them, they should hand over the baby to Dr Aamir," a notice on his website reads. The children would be given to deserving couples on air, the notice said.

The show's producers did not return Reuters calls seeking comment. It was not clear if poor families wishing to keep their children would also be helped.

Many Pakistanis expressed disgust that abandoned babies were being given away in what they see as an attempt to boost ratings. Chhipa insisted thousands of people wanted a baby and all potential parents were properly vetted.

The true outrage, he said, was the poverty forcing families to abandon children.

Hussain's show is one of many such broadcasts. The Pakistani media has flourished over the past decade or so following the liberalisation of the industry, particularly broadcasting, after decades of tight state control.

Now, instead of battling state restrictions, presenters fight for audiences and advertising by seeing who is most outrageous.

Recent episodes include a female anchor stalking couples in a park to challenge their morality, and a news programme which once ran a live broadcast showing a staff member bleeding to death in an operating theatre after he was shot in a riot.

Even among this company, Hussain stands out. In 2008, he hosted scholars who called for the deaths of Ahmadis, a persecuted religious sect in Pakistan. Within a day, two prominent Ahmadis had been shot dead.

The year before, he had to resign from his post as junior minister for religious affairs after denouncing author Salman Rushdie for blasphemy, a crime punished by death in Pakistan.

Since then, his university degree has been exposed as a fake and a video showing him making crude jokes with clerics between takes of his show has leaked onto YouTube.

"There is nothing they won't do to get viewers," said comedian Sami Shah. "If I was a cynic, I'd say this can only end badly. But since I'm a realist, I'll say it's already ended terribly."