Bangladesh on the brink of political disaster

The highly inept and autocratic rule of Sheikh Hasina is much to be blamed for the ongoing political uncertainly and violent unrest in the country. 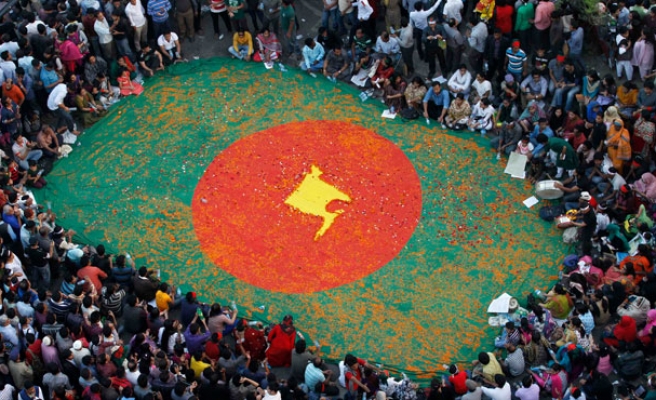 Bangladesh, a South Asian country of 150 million people, is on the brink of disaster now after facing a prolonged political turmoil for over a year. The recent bouts of political violence began on January 3 when police, on the order of the Prime Minister, Sheikh Hasina, acted very highhandedly and banned all the protests in the national capital city of Dhaka. The police also confined the leader of the country's main opposition, Bangladesh Nationalist Party, BNP, Khaleda Zia, to her office.

Apparently this was done to neutralize the opposition and teach a lesson to Zia, who had earlier called for country-wide protests and demonstrations on the anniversary of last year's ‘boycotted’ general election. But this action boomeranged and escalated the spate o fviolence all over the country, with bloody clashes between the members of Sheikh Hasina’s ruling Awami League (AL)  and Zia’s BNP. Although Zia was released later, the government is still feeling helpless to control the violence, which has in recent days left dozens of people dead and hundreds more injured.

The highly inept and autocratic rule of Sheikh Hasina is much to be blamed for the ongoing political uncertainly and violent unrest in the country. Instead of trying to resolve this national crisis by finding a mid-way and some sort of compromise with opposition through the medium of talks and dialogues, Begum Sheikh Hasina has adopted even more hard-line approach. She seems to be hell bent on showing the opponents down as if it were a bull-fighting arena.

Caught between the mindless fight and the long term feud between two battling Begums, the common man of Bangladesh is forced to pay the heaviest price as the economy of the country is getting the worst beating. This feuding in Bangladesh is not new; rather it can be traced back over decades. One of the two Begums, Hasina or Zia, has taken the turn to rule the country for over 25 years. They belong to powerful political families. Sheikh Hasina is the daughter of Bangladesh’s independence movement leader Sheikh Mujibur Rahman, while Khaleda Zia is the widow of Ziaur Rahman, the former president of the country.

As the incidents of police violence, targeted killings of opposition leaders and party workers are rising; it is taking a heavy toll on trade, tourism and industry, with holiday companies scrapping tours, farmers failing to get produce to market and some businesses scaling back operations temporarily as they wait for the violence to subside.

The worst affected sector is the garment industry, which accounts for 80 percent of Bangladesh’s exports, and is a key to the nation’s economy driving its growth and development. According to one estimate, there are around 4,000 factories in the country, which produces ‘fast fashion products’ for many famous brands and stores in the Western countries. The garment industry alone employs over six million people, out of which four million are women.

Though the latest crisis began on January 5 at the anniversary of last year’s parliamentary elections, the violent protests and nation-wide blockades have been continued off and on for over a year. The BNP led opposition had boycotted the 2014 general elections in protest against the refusal of Sheikh Hasina to allow a caretaker government to oversee the voting, as had been the case since 1996. The elections were controversial, with almost all major opposition parties boycotting and 154 of the total 300 seats being uncontested. Around 21 people were killed on polling day.

This resulted into a very farcical election without any opposition candidate in majority of the seats. Interestingly, the Awami League candidates were declared winner without any contests in more than half of parliamentary districts. As a result the BNP led opposition was totally excluded from mainstream politics of Bangladesh. The BNP’s political ally, the Bangladesh Jamaat-e-Islami, which was banned by the Bangladesh Election Commission from participating in the election on the dubious charges, also joined the protests and intensified the process of arson and looting and blockades.

All over the country, the strikes and road blockades are hampering the normal transportation process. It is hurting business and industry very hard, because trucks carrying goods cannot reach their destinations. The country’s $24-billion-a-year apparel industry is feeling very vulnerable and the garment exports are worst hit since trucks cannot reach the port in the southeast city of Chittagong. Several garment factory owners in Dhaka were forced to airlift cargo, incurring additional expenses, for fear of missing deadlines. According to the leaders of the Bangladesh Garment Manufacturers and Exporters Association, a trade group, said member factories had so far lost work orders worth more than $10 million with losses expected to rise. Be it tourism or garment industry, this was the best time for them to earn maximum profits. But there seems to be no end to the ongoing political violence in the country.

The autocratic arrogance and utter uncompromising attitude of the ruling Awami League chief, Sheikh Hasina, is entirely responsible for the political turmoil and nation-wide unrests.  The government of Sheikh Hasina, which already lacks the legitimacy because it was set up after a meaningless election sans opposition, has lost the credibility and completely failed in controlling the political crisis.

This has enormously damaged the reputation of the country in the world and shaken the confidence of foreign investors. Soon after the election in January 2014, The Daily Star, one of the leading newspapers in Bangladesh, carried an editorial that called the election the deadliest in the country's history. It further said that the ruling Awami League won "a predictable and hollow victory, which gives it neither a mandate nor an ethical standing to govern effectively."

As there seems to be no letup in the ongoing political turmoil in the country because the ruling party under the leadership of Sheikh Hasina is in no mood to listen to the demands of opposition, the nation’s economy will definitely suffer the heaviest blow from these spates of violence. The political elites of the country would do well not to over stretch the resilience of Bangladesh’s economy that has grown at roughly 6 percent every year for the past two decades. It is chiefly due to inherent strength of the country’s economy that in spite of all the unrests, the foreign-exchange reserves in February has risen to $22.2bn from $18.1bn a year ago. The external debt is also relatively low at 20.7 percent of GDP, and is primarily concessional, which also limits vulnerability to volatility in external capital flows. But the present upheaval would severely disrupt the production and distribution in the short term while foreign investment

would be badly hurt in the longer term.

However, even at this stage if political sanity prevails and normalcy could be restored, the country still has a chance to become one of the fastest growing economies in Asia.