The Bangladesh Nationalist Party had details of 242 supporters who had been killed and 60 who had disappeared between Dec. 26 and Jan. 27. 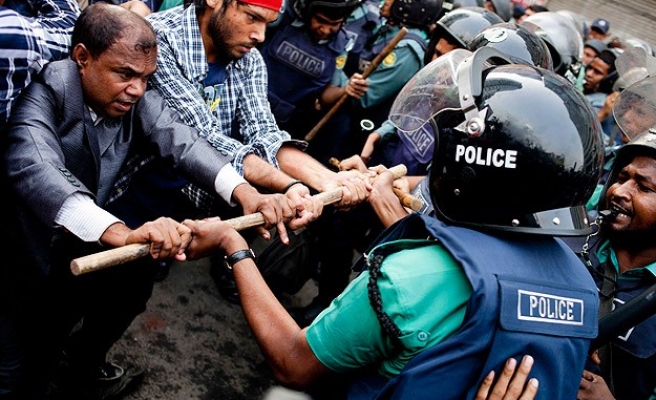 The head of Bangladesh's largest opposition party, the BNP, accused the government on Tuesday of being involved in the killing or disappearance of more than 300 activists around the time of the country's election.

The Bangladesh Nationalist Party boycotted the violence-plagued vote on Jan. 5 that was won by the ruling Awami League - its great rivals which the BNP has alternated power with over the decades.

The government had no specific response to the accusation but said such BNP allegations had previously been found to be untrue.

Begum Khaleda Zia, a former prime minister, said her party had details of 242 supporters who had been killed and 60 who had disappeared between Dec. 26 and Jan. 27, as well as another 22,000 who had been arrested.

"The activities of plainclothes security forces have significantly increased after the election," Khaleda told reporters. "They (the government) are sponsoring state run terrorism to wipe out the opposition's leaders and activists."

Such accusations are relatively common in the intense rivalry, and often violent confrontations, ofBangladesh's politics. It is difficult to verify either side's allegations, but it has sometimes turned out that the numbers involved are inflated.

Mashiur Rahman, an adviser to Prime Minister Sheikh Hasina, told Reuters: "They make these type of accusations frequently, when we have previously investigated such claims, we find they are not true."

Many BNP leaders are in jail or in hiding, and party chief Khaleda has said she was kept under virtual house arrest for more than two weeks until mid-January.

Rahman said at that time Khaleda had been prevented from leaving her residence because she had called on activists to carry out violence to resist the election.

U.S.-based group Human Rights Watch urged the government last month to ensure proper control of the security forces and hold a credible investigation into any deaths.

Nearly 150 people have been killed in election-related violence in recent months, from both sides of the political spectrum.

The vote was shunned by international observers as flawed and derided as a farce by the BNP.

The impasse between the country's two dominant parties undermines the poll's legitimacy and is fuelling worries of economic stagnation and further violence in the impoverished South Asian nation of 160 million.