The victims were found aboard a 22-metre long trawler flying the Myanmar flag off Cox's Bazar, about 400 km from the capital Dhaka 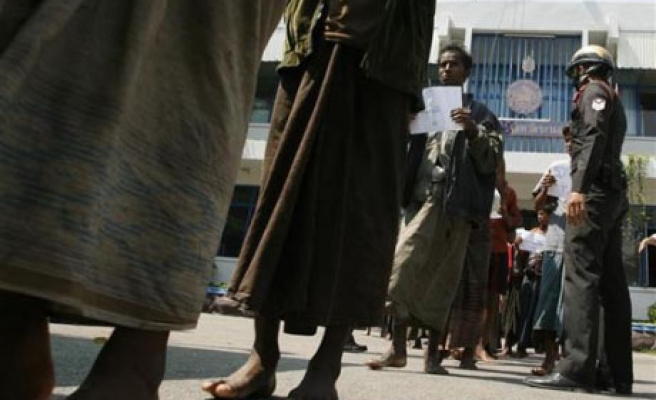 More than 600 trafficking victims from Myanmar and Bangladesh have been rescued off the South Asian coast, a navy spokesman in Dhaka said on Tuesday, in the single biggest operation of its kind by Bangladesh authorities.

The victims were found aboard a 22-metre long trawler flying the Myanmar flag off Cox's Bazar, about 400 km (250 miles) from the capital Dhaka, navy spokesman Commodore M Rashed Ali said.

He said that the trawler had been awaiting another vessel which would carry the trafficking victims on the deep sea voyage to Malaysia.

Bangladesh Coast Guards officials said people being trafficked expect their boats or ships to sail to Malaysia, but they are often kidnapped and taken to jungle hideouts in Thailand where they are held for ransom.

The victims are usually held until relatives pay money as ransom to secure their release. If a ransom is not paid, the traffickers kill them or sell them as slaves.

Thousands of Rohingya boat people who have left Myanmar in the past month have yet to reach their destinations, say relatives and an advocacy group for the persecuted minority, raising fears their boats have been prevented from reaching shore.

About 12,000 Rohingya, a mostly stateless Muslim people, have left the western Myanmar state of Rakhine since Oct. 15, said Chris Lewa of the Arakan Project, which plots migration across the Bay of Bengal.

Another 4,000 boat people, both Rohingya and Bangladeshis, left neighbouring Bangladesh during the same period, said Lewa.