About 1,000 demonstrators protest the death sentences of three Jamaat-e-Islam opposition leaders from Bangladeshi. 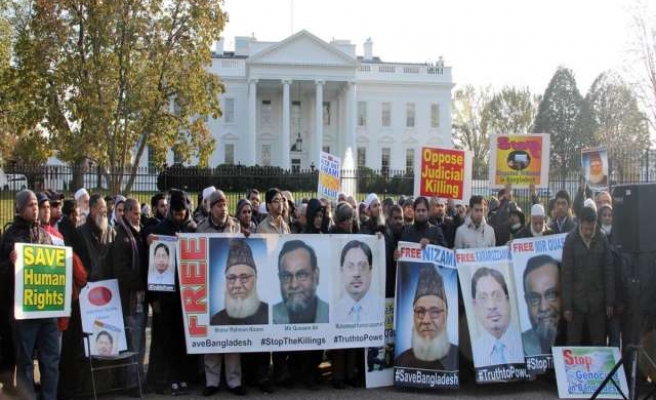 About 1,000 demonstrators gathered Thursday in front of the White House to protest the death sentences of three members of the Jamaat-e-Islam political party in Bangladesh.

That court that heard the case, the International Crime Tribunal, or ICT, was established in 2009 by Bangladesh's Awami League government in order to investigate humanitarian crimes during the 1971 Bangladesh war of independence.

"Everybody is okay with the court establishment reason, but they also need to meet with international standards," said Mohammad Nakibur Rahman, HRDB president and University of North Carolina professor.

The group has petitioned the White House and intends to place public pressure on Bangladesh to bring awareness and hopefully change the court’s decision.

HRDB argued that the trial standards were not upheld, including “the presumption of innocence, clarity and specificity of charges, the right to appoint council of one's own choosing, and sufficient time to prepare defense."

Following the Oct. 29 sentence, Human Rights Watch appealed to the Bangladeshi government to halt the executions of those accused of war crimes.

“Human Rights Watch has long supported justice and accountability for the horrific crimes that occurred in 1971, but we have also stated repeatedly that these trials must meet international fair trial standards," the organization said in a statement.

The country’s opposition parties and other international organizations have also criticized the court’s process and expressed concerns for defendants not getting a fair trial.

One of the Jamaat-e-Islam's most influential leaders, 91-year-old Ghulam Azzam, was sentenced last July to a 90-year prison term for masterminding the independence war. He died of a stroke in October.

In February 2013, at least 70 people were killed in clashes that erupted after the court sentenced Jamaat-e-Islam's Vice President Delwar Hossain Sayeedi to life in prison.