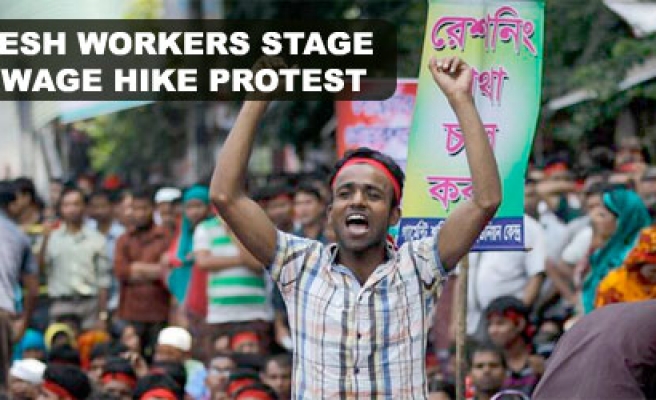 About 50,000 garment industry workers held their largest protest so far in the Bangladeshi capital of Dhaka to demand an increase of more than 1-1/2 times in the minimum wage, police and labour officials said on Saturday.

"Our backs are against the wall, so we don't have any alternative unless we raise our voice strongly,"Nazma Akter, president of the United Garments Workers' Federation, which groups 52 garment worker's groups, told the peaceful protest.

"We will not hesitate to do anything to realize our demand."

Bangladesh's $20-billion garment export industry employs roughly 4 million workers who earn about 3,000 taka ($38) a month, or half what Cambodian factory workers now earn. They want a raise to 8,000 taka ($103) per month.

"We are not the object of mercy, the economy moves with our toil," Akter added.

Although the factory owners earlier agreed to a raise of just 20 percent, the workers refused this, calling it "inhuman and humiliating".

The four-hour protest ended at 1200 GMT. "It is the largest gathering of its kind to realise their demand for raising wages," said Dhaka Metropolitan Police Chief Habibur Rahman.

Earlier more than 300 factories in an industrial zone near the capital shut production as workers came out in support of the same demand, blocked a highway and damaged several vehicles.

Joined by workers from adjacent factories, they vandalised several factories, he added, which prompted the owners of more than 300 units to halt production for the day, fearing more vandalism. The workers later joined the Dhaka rally.

The government is in talks with labour groups and factory owners on a new minimum wage. Bangladeshlast hiked its minimum garment-worker pay in late 2010, almost doubling the lowest pay.

This time, wages are unlikely to go much higher as factory owners, who oppose the raise, say they cannot afford higher salaries as Western retailers are used to buying cheap clothing.

In July, Bangladesh approved a labour law to boost worker rights, including the freedom to form trade unions, following the April collapse of a factory building that killed 1,132 garment workers and sparked debate over labour safety and rights.

Bangladesh faced pressure to adopt better labour laws after the European Union, which gives preferential access to the country's garment industry, threatened punitive measures if it did not improve worker safety standards.