Beijing insists it has sovereign rights to nearly all of the South China Sea, even waters close to the coasts of other states 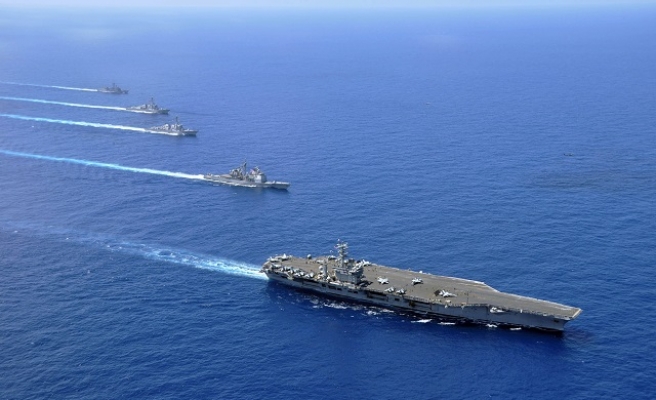 Beijing warned Thursday that it would "firmly oppose" infringement of its sovereignty after indications Washington will soon send warships close to its artificial islands in the South China Sea.

Tensions have mounted since China transformed reefs in the area -- also claimed by several neighbouring countries -- into small islands capable of supporting military facilities, a move that the US says threatens freedom of navigation.

Senior officials in Washington have signalled that the US military could sail close by the islands in the coming days or weeks to demonstrate that Washington does not recognise a Chinese claim to territorial waters around them.

Chinese foreign ministry spokeswoman Hua Chunying said that the country respected freedom of navigation and overflight in the South China Sea, but would "firmly oppose infringement of sovereignty under that pretext".

Beijing insists it has sovereign rights to nearly all of the South China Sea, even waters close to the coasts of other states.

The sea is a strategically vital waterway with shipping lanes through which about a third of all the world's traded oil passes, and the dispute has raised fears of clashes.

Hua's comments came after US Defense Secretary Ash Carter warned Beijing following a meeting of American and Australian officials Tuesday that Washington will continue to send its military "wherever international law allows", including the South China Sea.

Australia is a key Pacific ally of the US and its foreign minister Julie Bishop said the two countries were "on the same page" on the issue.

An editorial in the Global Times, which is close to China's ruling Communist party, condemned Washington's "ceaseless provocations and coercion".

"China mustn't tolerate rampant US violations of China's adjacent waters and the skies over those expanding islands," it said, adding that its military should "be ready to launch countermeasures according to Washington's level of provocation".

Coming within 12 nautical miles of the islands could be a "breach of China's bottom line", the paper said, warning: "If the US encroaches on China's core interests, the Chinese military will stand up and use force to stop it."

Satellite images of the islands published by the Washington-based Centre for Strategic and International Studies show that China has reclaimed millions of square metres (feet) of land in the Spratlys, known as Nansha in Chinese.

The imagery also shows China has built a host of facilities, including as many as three runways, at least one of them 3,000 metres (10,000 feet) long.

On Saturday, China said work had finished on two lighthouses in the disputed area and pledged more construction, which it says is intended to serve civilian as well as military purposes.

The work has been seen as an attempt by Beijing to assert its territorial claims by establishing physical facts in the water, although international law says they can only arise from naturally occurring geographic features.

In May, video taken by CNN during a surveillance flight by a US P-8 Poseidon showed Chinese naval forces warning the US aircraft away from the artificial islands.

A tense broadcast from Chinese forces in the area, warned the craft, which remained outside the limit, to "please go away... to avoid misunderstanding."

Hua has previously accused "certain countries" of "flexing military muscles in the South China Sea over recent period of times".

"That is the biggest cause of 'militarisation' in the South China Sea,” she added Wednesday.

Brunei, Malaysia, the Philippines and Vietnam -- members of the Association of Southeast Asian Nations (ASEAN) -- claim parts of the sea. Taiwan is a sixth claimant.

In the past, Chinese ships have harried fishing vessels from neighbouring countries for operating in contested waters in the area.

Vietnam has repeatedly accused China of ramming the craft as they ply local waters.

China has invited ASEAN defence ministers for a two-day informal summit in Beijing starting Thursday, according to the country's defence ministry.