Even though he has emerged as the idealistic new face of the party, one of the country's most notorious politicians remains firmly in charge: Bilawal's father, Asif Ali Zardari. 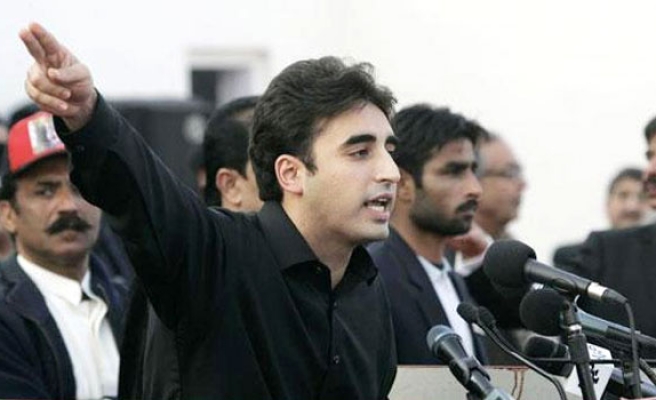 He was a 19-year-old Oxford undergraduate when his family named him chairman of Pakistan's oldest dynastic party.

In the years that followed, Bilawal Bhutto Zardari, now 26, has been groomed to take over the dynasty and bring his family's political party back to power.

The young Bhutto officially launched his political career last month, telling hundreds of thousands of supporters at a rally in the city of Karachi he would fight for the revival of the Pakistan People's Party.

Even though he has emerged as the idealistic new face of the party, one of the country's most notorious politicians remains firmly in charge: Bilawal's father, Asif Ali Zardari.

Zardari's five years as president were marked by allegations of corruption and misgovernment and the PPP was voted out in a 2013 election when Prime Minister Nawaz Sharif came to power.

While the PPP relies on the Bhutto name and legacy to bind its supporters, party insiders say Bilawal has little future without the political expertise of his father.

"The son realises he does not have his father's experience. The father knows his son's enthusiasm and energy is greater," said a family friend, requesting anonymity as he was not authorised to speak to the media on the matter.

"The day-to-day running of the PPP, all the decision-making, policy-setting, is still Asif's domain. Bilawal has no authority or experience. ... The boss is Asif Ali Zardari."

But being the face of Pakistan's greatest political dynasty is a highly dangerous job.

Bilawal's grandfather, Zulfikar Ali Bhutto, died at the gallows, hanged in 1979 after being deposed in a military coup.

His mother, Benazir Bhutto, was killed in a bomb and bullet attack in 2007, months after she returned to Pakistan from eight years in self-exile.

Placing the burden of blood and history on the son reveals an enduring strain in politics in South Asia. In India, four generations of the Nehru-Gandhi family have dominated politics. Dynasties also prevail in Sri Lanka and Bangladesh.

Speaking in his mother's study at the family house in the village of Naudero, Bilawal told Reuters he was being tutored by his father to play a role in politics.

"I have learnt politics from both my father and mother," he said. "But I engage in progressive politics, learning from the past but looking forward and asking where do I go from here."

Bilawal's grandfather was known for having mobilised the country's first mass-based party, using the slogan of "food, shelter and clothing" to shift the focus from religion to economic issues.

Under him, government services and educational opportunities were opened to women for the first time and all Pakistanis had the right to a passport.

"(Zulfikar Ali) Bhutto's charisma was not just emotional. He had an economic plan," Haji Mumtaz Ali, a government official said at Ghari Khuda Bakhsh, a village set among paddy fields where seven generations of the Bhutto family are buried. "Bhutto brought investment. He gave us the nuclear programme."

But analysts and many voters believe the memories of Zulfikar Ali and Benazir Bhutto have begun to fade and the moment has been seized by politicians like former cricket star Imran Khan whose anti-corruption message has attracted young people wanting to break free of dynastic politics.

"Bilawal is not tainted with any of the rumours that afflicted the PPP in the past," said Husain Haqqani, a family friend and a former ambassador to the United States.

Political analyst Jami Chandio said: "This is a very competitive political environment and Bilawal needs a new team and a new message. He needs to fire daddy's friends if he wants to change things."