Big aid agencies to gather for Muslims in Myanmar

As part of OIC's decision, giant humanitarian assistance organizations will come together in a meeting in Malaysian capital of Kuala Lumpur on August 3. 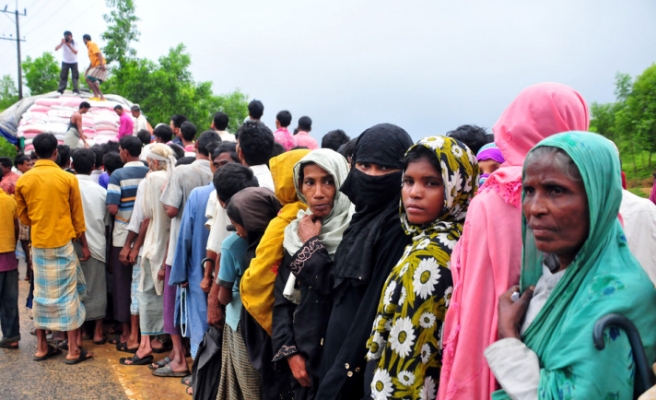 The Organization of Islamic Cooperation (OIC) asked member countries to organize meetings to help the Muslims in Arakan state of Myanmar and to send their diplomats to the region.

The OIC will bring together giant humanitarian assistance organizations on August 3 and try to provide more assistance to Rohingya Muslims.

In a statement released Monday, the OIC's Press and Information Department said that they brought together the representatives of OIC member states and the UN Human Rights Council in Geneva last Friday to find a solution to the violence against Rohingya Muslims in Myanmar's Arakan (Rakhine) state.

In a final declaration at the Geneva meeting, OIC diplomats in Myanmar were advised to make a visit to the "Northern Arakan State" and the ambassador of Myanmar in Geneva was conveyed about this decision.

At the meeting, a decision was taken to send a copy of OIC Secretary General Ekmeleddin Ihsanoglu's letter earlier sent to the President of Myanmar and the UN Secretary General to the UN Human Rights High Commissioner so that violence in Arakan state ends.

A decision was also taken at the meeting for OIC member states to organize activities in their capital cities to raise international awareness on the genocide committed against Rohingya Muslims.

As part of OIC's decision, giant humanitarian assistance organizations will come together in a meeting in Malaysian capital of Kuala Lumpur on August 3.

The organizations will share the information they have on Arakan and discuss ways to send aid to Rakhine.

OIC's executive board will convene on August 5 in an extraordinary meeting. The meeting will be attended by the general director of Arakan Rohingya Union.

Decisions to be taken at the meeting of the executive board will be presented to the leaders of the Islamic world in the Fourth Extraordinary Islamic Summit to take place in Mecca on August 14.