Tight security makes it difficult for foreign journalists to visit the area, rendering it almost impossible to reach an independent assessment of the situation 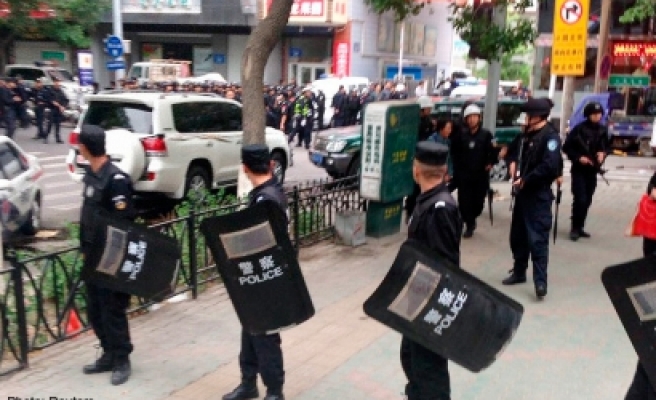 The blasts came as China punished 17 regional officials and police "for being accountable" for a July 28 attack by masked men that led to almost 100 deaths of police, officials and civilians, and for the subsequent killing of a pro-Beijing imam.

The government has blamed a surge in violence over the last year in Xinjiang, home to the Muslim Uighur people, on militants or separatists.

State media say hundreds of people have been killed in the past year's violence, including some police.

Tight security makes it difficult for foreign journalists to visit the area, rendering it almost impossible to reach an independent assessment of the situation.

An explosion in Luntai county, on the northern edge of the Taklamakan desert in central Xinjiang, hit a shop in the county seat, while with two more blasts occurred in nearby townships on Sunday, news website www.ts.cn, which is run by the Xinjiang Communist Party committee, said.

The wording of the report suggested there were other explosions but it gave no details.

"At present, all the injured have been sent to hospital for full treatment, local social order is normal, and the cases are being investigated," it said.

Separately on Sunday, the Xinjiang party branch punished several police, county and town officials and an official of an Islamic association in the city of Kashgar over the July 28 attack and the killing two days later of the imam of Xinjiang's biggest mosque, the official Xinhua news agency reported.

It did not say in what way the 17 officials and police were held to be accountable.

The government said 37 civilians were killed in the July 28 attack and 59 "terrorists" were gunned down by security forces in two towns in Shache county in Xinjiang's far south. Police arrested 215 people, Xinhua said.

Shache's party boss was demoted and stripped of his role, with others sacked, demoted or given warnings, Xinhua said, while adding that a former town-level lawmaker was promoted for his "timely reports and good performance" during the attack.

"China's policies are leading people to adopt fierce measures of resistance to maintain their dignity and justice," said Dilxat Raxit, spokesman for the exiled World Uyghur Congress. "The turbulence in the region and China's policies are directly related."

The government also announced guidelines on Sunday to specify what actions legally amount to terrorism or support to terrorists. State media said the guidelines were issued earlier in the month.