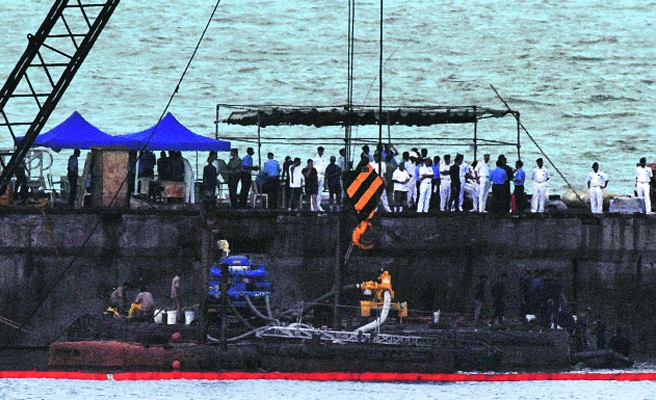 India's navy said on Friday divers had found the bodies of three sailors who were on board a submarine badly damaged by a fire and explosions and that it was unlikely any of 15 other missing crew members would be found alive.

Eighteen sailors were missing after weapons stored in the forward section of the Russian-built INS Sindhurakshak exploded in the middle of Tuesday night, causing a fire as it lay berthed in Mumbai, thenavy's worst losses in more than four decades.

"The damage and destruction within the submarine around the control room area indicates that the feasibility of locating bodies of personnel in the forward part of the submarine is also very remote as the explosion and very high temperatures, which melted steel within, would have incinerated the bodies too."

The sinking of the diesel-powered submarine is the biggest blow for the navy, both in terms of lives and the loss of a vessel, since a frigate was sunk in the 1971 war with Pakistan.

It has turned the spotlight on the navy's ageing submarine fleet even as it spends billions of rupees on aircraft carriers to counter the rising influence of the Chinese navy in the Indian Ocean.

The Sindhurakshak is a Kilo class vessel, which were built in former Soviet and later Russian shipyards for the Indian navy from 1985 to 2000. The navy has 10 of the submarines and four German HDW boats.

A defence source said the navy did not have a deep submergence rescue vehicle that other navies use to save trapped sailors, although in this case the incident occurred while it was docked and not in the deep seas.

The navy said divers couldn't enter the Sindhurakshak for more than 12 hours because of boiling water inside parts of the vessel. Access was "almost impossible due to jammed doors and hatches, distorted ladders, oily and muddy waters".

Only one diver could work at a time initially to clear a path inside the submarine. Divers are trying to reach further inside to find the remaining bodies, the navy said.

A naval board of inquiry has been ordered into how weapons went off while the vessel was berthed in the high-security Mumbai base.

Weapons on board such a submarine include torpedoes and missiles that are launched over long ranges above water.