"There was total chaos when the bomb went off. People were screaming and running for safety," said resident Zafar Baluch. 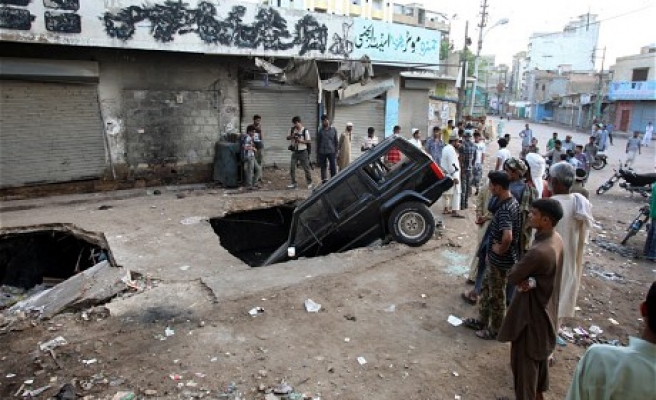 The sweltering port of 18 million people is largely inured to violence - around a dozen bodies are found around the city every day - but the killing of so many youngsters shocked many residents.

"There was total chaos when the bomb went off. People were screaming and running for safety," said resident Zafar Baluch.

It was unclear who was behind the blast in the Lyari district, a stronghold of the main opposition Pakistan People's Party. Karachi is home to many groups, including the Taliban. Many political parties there have armed wings to fight turf wars.

The attack appeared to be aimed at a provincial minister, Javed Nagori, who had come to hand out prizes at the football match, said provincial information minister Sharjeel Memon.

The children had been playing while their parents shopped for the upcoming Muslim holiday of Eid. In the run-up to Eid, many markets open all night since residents are fasting during the day.

"There was smoke everywhere and people were covered in glass," said Sheree, who didn't want to give her last name. She was near Nagori's convoy when the blast knocked her off her feet. She saw the bodies of three children, she said.

In the capital of Islamabad, security forces have been put on high alert until the holiday is over.