Clashes between protesters and police on two-year anniversary of execution seen as unfair by many Kashmiris. 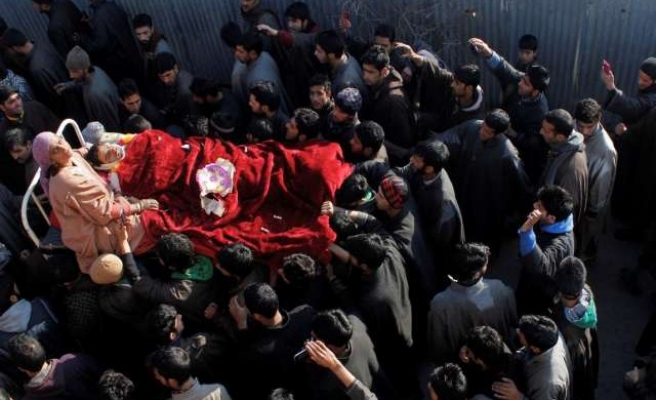 Hundreds of protesters clashed with Indian authorities on Tuesday at the funeral of a young man killed during a demonstration in occupied Kashmir. Pro-independence groups called for a daylong strike in the tense Himalayan territory.

The clashes marked the second day of a shutdown in Indian-held Kashmir, with Indian authorities enforcing restrictions on civilian movement and curfews in several areas.

Police officials also confirmed that large areas of Kashmiri capital Srinagar were also placed under restrictions and an unannounced curfew was imposed in several areas.

Despite the heavy restrictions, hundreds of youth took to the streets and clashed with the Indian troops.

Shouting "Go India, Go back!" and "We want freedom," the funeral protesters hurled stones at occupation forces while marching toward a highway near the village of Palhalan where Farooq Ahmed Bhat was being buried.

Police fired tear gas while paramilitary troops tried to block the march. There were no immediate reports of injuries.

The boy has been killed and two people wounded amid a shutdown in Indian-occupied Kashmir on the anniversary of the controversial execution of a former Kashmiri fighter.

Across the region there were demonstrations and stone-throwing clashes with Indian security forces who were deployed in high numbers, barricaded roads and erected checkpoints.

“Today evening in Palhalan area in Pattan, one person, Farooq Ahmad Bhat, was killed in a firing incident, while two others sustained injuries,” Indian police said.

According to locals, Palhalan was tense after the news of the killing became known and hundreds of Indian troops are trying to stamp out the stone throwing protests with tear gas shells and live bullets.

All businesses, government offices and educational institutes across the Indian-held Kashmir stayed shut while public transport stayed off the roads.

The protests and shutdown marked the 2013 hanging of Afazal Guru, who was sentenced to death by the Indian Supreme Court for a 2001 attack on parliament, despite an alleged absence of clear evidence to "satisfy the collective conscience of the society."

“He (Guru) was hanged even though he was innocent and people know that and they will not forget him,” Guru's father in law, Ghulam Mohammad Bohru, told The Anadolu Agency. “It is the people themselves who feel in their hearts to remember Afzal and today's silence on the streets is a witness of that.”

Guru was a pro-Independence Kashmiri militant fighting against Indian rule, who was later arrested by the police. According to his family, Guru, after his release, started a small business and had no role in the militancy, but the Indian police consistently tried to force him into working for them.

Guru had confessed in TV interviews that he helped plot the attack on India's Parliament that killed 14 people, including the five gunmen, but later denied any involvement in the attack and said he had been tortured into making the confession.

Guru's family came to know of his execution through televised news and were told by Indian authorities that a letter informing them of the execution had been sent to them through the "Express mail," though it only arrived after his hanging.

Guru's execution is a sensitive matter in Indian-held Kashmir, where most people believe his trial to be unfair.

“He was number 28th on the death row. But they left alone the 27 people before him and hanged Guru. It was a murder and had nothing to do with justice,” says Aamir Yousuf, one of the protestors in Srinagar. “The trial was a farce and his execution was politically motivated.”

Some believe the hanging was an attempt to appease nationalist hardliners ahead of 2014 parliamentary elections.

Guru's body was also buried inside the prison premises and despite repeated attempts, the Indian authorities refuse to hand over Guru's mortal remains to his family.

The resistance leadership have called for another strike on Wednesday to mark the 1984 hanging of pro-independence leader Mohammed Maqbool Butt, who was executed for killing an Indian intelligence officer.

The resistance leadership have consistently demanded that both Guru's and Butt's remains be returned to Indian-held Kashmir for burial. Both of them are buried inside the prison premises in New Delhi's Tihar prison.

Since 1989, Kashmiri resistance groups in the region have been fighting against Indian rule for independence, or for unification with neighboring Pakistan.