Moderate monk Wataraka Vijitha Thero has been slammed by Buddhist extremist for his interfaith meetings with Muslims. 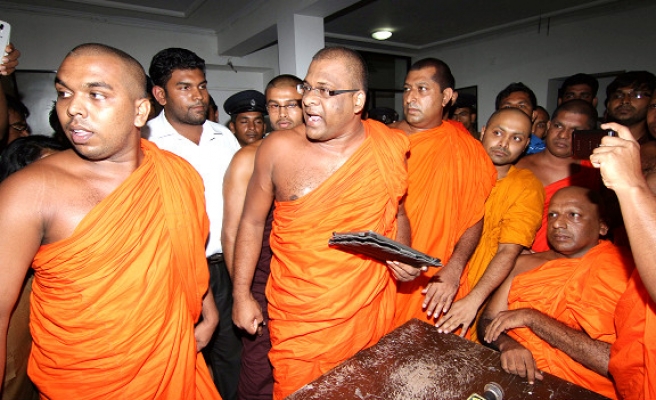 Buddhist Monks who are speaking out against the extremist Sinhalese Buddhist nationalist Bodu Bala Sena (BBS) group in Sri Lanka are being beaten, stripped naked and left unconscious for participating in interfaith meeting with Muslims.

According to media reports, the BBS has denied being behind an assault on moderate monk Wataraka Vijitha Thero, who was found in the district of Panadura undressed with several cuts on his body.

Wataraka Vijitha Thero is a vocal critic of the Bodu Bala Sena, whose rally in a southern town triggered deadly anti-Muslim riots on Sunday night where four people were killed.

Thero had openly made statements supporting Muslims and complained that he was being threatned to the police.

The BBC’s Charles Haviland in Colombo reported that with some exceptions mainstream media outlets on the island have given little coverage and not sent journalists to report on the events.

Homes and businesses in the village of Welipenna, near the town of Aluthgama is where most attacks take place. An unarmed security guard from the Tamil minority was killed at a farm near Aluthgama.

Sri Lanka’s defence secretary Gotabhaya Rajapaksa, brother of the President, uttered his support for the BBS.

The most senior Muslim minister in his cabinet staged a boycott of parliament ,which is overwhelmingly Buddhist, and said his own government did nothing to prevent the violence.