Call for protection for Cambodian workers in Malaysia 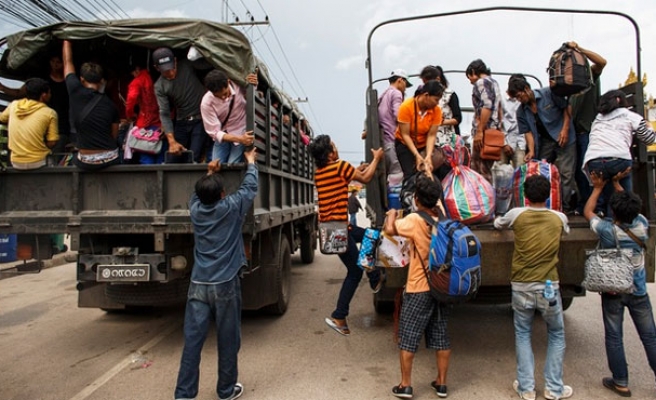 Touch Nay speaks in a barely audible whisper – a result of what she says was two-and-a-half years of abuse at the hands of her Malaysian employers.

“The beating started five days after I arrived,” the 26-year-old Cambodian told.

She said she was beaten so badly that one of her hands was broken and she is now going blind in one eye, which is visibly damaged and greyed over.

When she discussed returning to Cambodia, the agency that took her to Malaysia told her she would have to pay $5,000 if she wanted to break her contract.

Unable to pay such a fee, she remained to endure years more abuse.

“I would recommend all young people not to go to Malaysia because they may be tortured like me,” Nay said.

Her case was among those highlighted by Cambodian human rights group Adhoc at a press conference in Phnom Penh.

The cases involve Cambodian guest workers, usually domestic maids, who endure torture and rape in Malaysia. There have also been reports of Cambodians murdered by their employers.

According to Adhoc, at least 63 Cambodian migrant workers have disappeared in Malaysia since 2010.

The group has been investigating abuses since October 2011, when Prime Minister Hun Sen suspended the migration of Cambodian women to Malaysia.

Since then, the two countries have drafted an agreement on migrant workers but it is yet to be signed.

Adhoc called for the governments to address key issues such as missing workers, clamping down on bogus agencies that use fake documents to send workers abroad and ensuring fair pay for workers.

The group has received 965 complaints involving 1,672 people since 2010. Of these, contact was made with 529 affected workers although only 311 have since returned to Cambodia.

“However, there are still 130 cases pending intervention in which the victims have not yet received their compensation, salary or justice,” Adhoc said in a statement.

“These include 63 disappearances, 16 cases of torture, two cases of victims’ salaries being withheld, 12 cases of forced extensions of contracts, 29 cases of lost contact or inability to contact the migrant worker in Malaysia.”

One of the missing women is 33-year-old Doul Khon, whose mother, Doul Sokhon, told that she last saw her daughter in 2010 when she left for Malaysia.

“My daughter divorced her husband but she has two children,” Sokhon said. “She said she wanted to go to Malaysia to earn money for the family, but I didn’t want her to go.”

When a broker called Khon and told her she could make $2,000 in two years in Malaysia, her mind was made up.

“I’ve never received any information about her since she went to Malaysia,” Sokhon told.

T&P, the recruitment firm that helped arrange for her daughter to go to Malaysia, was shut down in 2011 after police found 45 women forcibly held in one of its premises in the central province of Kompong Chhnang. Allegations included forcible detention, faking documents and sending underage girls abroad to work.

Adhoc President Thun Saray urged the Cambodian and Malaysian governments to cooperate and ensure the safety of workers.

“They are human beings, so the government should take action,” he said.

Heng Suor, the Labor Ministry spokesman, could not be reached for comment Tuesday. The Malaysian embassy in Phnom Penh failed to respond to emailed questions.