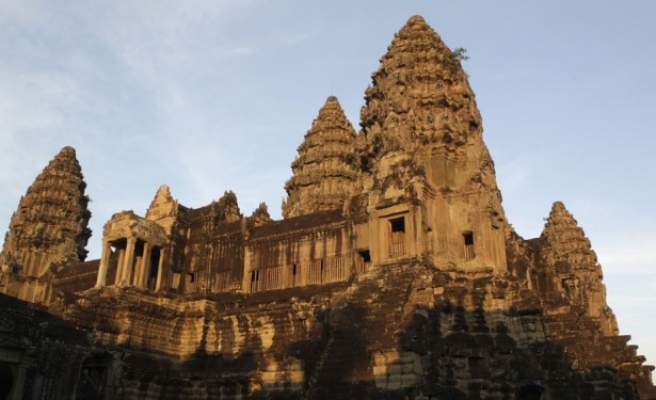 Cambodia has asked the Thai army to tear down a barbed-wire fence it says has been erected on disputed border territory, local media reported on Monday.

According to The Cambodia Daily newspaper, Cambodia’s military has sent a letter to its Thai counterpart demanding a 130-meter barbed wire fence near Preah Vihear temple - a UNESCO World Heritage Site confirmed Cambodia's property in 2008 by an international court - be demolished.

The shared border has long been a hot-button issue, especially around the 11th century temple where clashes between Thai and Cambodian forces has regularly broken out.

Cambodia’s Foreign Affairs Spokesman Koy Kuong told the paper, “[the fence] is in front of the temple. The Cambodian army sent a letter to the Thai side because it violated the MOU [memorandum of understanding] from 2000... meaning that there can be no development in that area.”

Thailand’s Ambassador to Cambodia could not be reached for comment Monday, but a spokesman for Cambodia's Council of Ministers, Phay Siphan, told the Anadolu Agency that there had been no response from the Thai side yet.

In February 2011, relations between the two countries hit a new low when clashes between Thai and Cambodian troops during negotiations over the border resulted in six deaths in four days. Both sides have accused one another of starting exchanges of artillery fire that occasionally caused damage to the temple.

However, relations improved dramatically when Yingluck Shinawatra – dismissed early this May - became the Thai premier in 2011. Cambodia’s strongman prime minister, Hun Sen, is a close friend and golfing buddy of Yingluck’s disgraced billionaire brother Thaksin Shinawatra, who lives mostly in Dubai having been deposed in 2006 on corruption charges.

While the International Court of Justice (ICJ) in The Hague awarded the actual temple to Cambodia in a 1962 edict, Cambodia asked the ICJ in 2011 for clarification regarding a disputed area of land adjacent to the monument.

The court’s ruling—announced in November last year—left matters rather ambiguous. While it ruled that Cambodia owned the natural ground around the temple, the ICJ left it to the two countries to establish ownership over the 4.6 square kilometers of surrounding land.

Despite predictions by some analysts that the ICJ ruling could cause border tensions to flare again, both the Thai and Cambodian governments hailed the edict as a success and the verdict was accepted peacefully and without demonstration.

However, the erection of this new fence comes in the wake of last week's coup d'etat in Thailand that saw the removal of Yingluck's government and the declaration of martial law.

Aside from military disputes, the Thai-Cambodian border has also been a source of contention in other ways.

Cambodians, usually poor rural villagers, regularly cross into Thailand looking for high-value timber as their own forests have been much depleted by logging. Luxury rosewood can sell for thousands of dollars and there is a large market for the wood in China.

In one week alone in March, Thai forces shot 15 Cambodian villagers after crossing the border. The killings prompted the Cambodian government to summon the Thai ambassador and to write a letter to the Thai side demanding that they arrest rather than shoot loggers.

For its part Thailand claims they only shoot when shot at first.

Cambodian rights watchdog Adhoc said 33 Cambodian illegal loggers were shot dead across the border last year, a decrease from the 45 killed in 2012.

Phil Robertson, deputy director for Human Rights Watch’s Asia division, told AA that the killings of Cambodians across the border was a “major human rights issue.”

“What is happening in the jungle along the border remains disputed precisely because Thailand refuses to countenance any serious, independent investigations into the circumstances in which their border forces are shooting and killing scores of Cambodian loggers,” Robertson said.

“Thailand and Cambodia need to engage in immediate high level dialogue to urgently sort out this situation and end the bloodshed,” he added.