Garment factory workers from across Cambodia are taking part in a global day of worker solidarity. 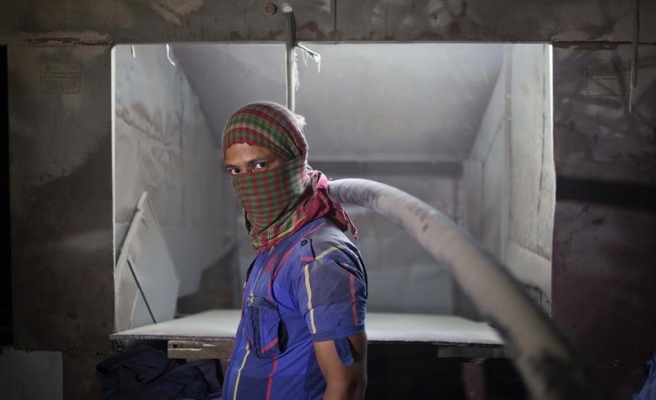 Cambodia deployed armed troops in its capital on Wednesday as garment workers held rallies to revive a campaign for higher wages that had helped to stoke a year-long political crisis.

About 500 textile workers rallied in an industrial suburb of Phnom Penh, demanding a sharp hike in the monthly minimum wage to $177 from $100, as dozens of soldiers armed with assault rifles watched. Witnesses said army helicopters flew over the factories earlier.

"Why is our government so afraid of its own people, especially people who are only protesting to earn a basic salary?" said Naly Pilorge, director of rights group Licadho.

But no incidents of violence were reported.

The growth of the garment sector has become a vital but troublesome issue for the government of long-serving Prime Minister Hun Sen.

It has been a boon for the fledgling economy, providing as many as half a million jobs and generating $5 billion annually, but frequent protests by increasingly assertive unions have tested the government's patience.

At stake if the campaign leads to prolonged strikes is the possibility of reduced orders from firms that outsource to Cambodian factories, such as Gap, Nike, H & M Hennes & Mauritz and Zara, owned by Inditex.

"We want to send a message to all buyers that they must provide a basic wage," Ath Thon, president of the biggest independent union, the Coalition of Cambodian Apparel Workers Democratic Union, told reporters at the rally.

Cambodia's garment sector is dwarfed by those in China and Vietnam, but lower wages have lured brands to the country. However, complaints about "sweat shop" working conditions and a crackdown by security forces in January, which killed at least five people, could damage the reputations of the brands.

Instability in Cambodia comes as Myanmar offers generous tax breaks to manufacturers and Vietnam, which exported $18 billion worth of textiles last year, negotiates a raft of global trade deals to slash tariffs.

"They understand that Cambodia's garment sector has victimized many workers and when they couldn't receive the basic wage, they protested and got killed," Ath Thon said, adding that 400,000 Cambodian textile workers participated in the campaign.

The long-running dispute over pay looked to have been settled prior to last year's election, when the Garment Manufacturers Association in Cambodia agreed to gradually raise the minimum wage to $160 by 2018.

But things changed when the opposition Cambodia National Rescue Party (CNRP) made an election campaign pledge to raise the figure further. CNRP won support from textile unions during its months of street protests to demand a re-run of a July 2013 poll it said was rigged by the ruling party.

CNRP struck a deal with the Cambodian People's Party two months ago to end its year-long parliamentary boycott and a fragile truce remains, although it is unclear whether CNRP is backing the latest wage campaign.