Minister says only 3 refugees at Australian immigration center on Nauru met with officials to discuss resettling in Cambodia. 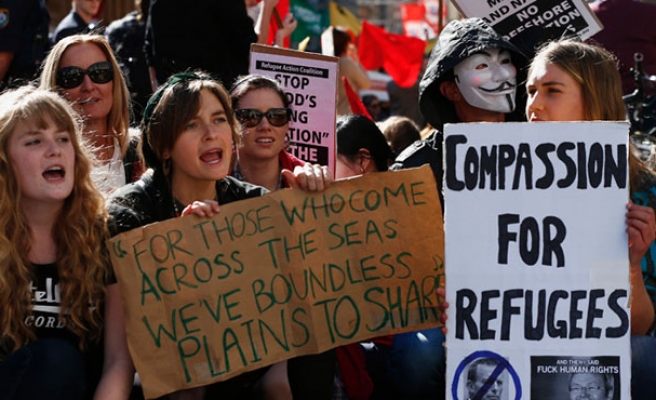 Cambodia’s interior minister has hinted that a controversial deal to resettle refugees who had tried to find asylum in Australia may be on shaky ground following a visit to the South Pacific island of Nauru last week.

The Cambodian delegation was on a mission to sell the country as a viable place to live for the predominantly Muslim refugees, who are housed in camp-like conditions on Nauru. Australia proposed the deal last year, which was signed and a memorandum of understanding finalized in an elaborate ceremony in Phnom Penh in October.

The Phnom Penh Post reported Thursday that Interior Minister Sar Kheng had said "only three refugees came to meet with our officials."

"The others refused to meet us, so we don't know what to do. It’s still unclear whether the three who met us will come [to Cambodia] or not," the Post quoted him as saying.

Multiple attempts by The Anadolu Agency to reach officials at the Interior Ministry, Immigration Department and the Foreign Ministry have not been successful this week.

Interior Ministry spokesperson Khieu Sopheak could not be reached for comment Friday and Long Visalo, a secretary of state with the Foreign Ministry who led the delegation, told AA: "If you have some request please send it to me," and hung up without providing an avenue through which to do so.

The transfer of refugees to Cambodia, one of the poorest and most corrupt countries in the world, is supposed to be on an entirely voluntary basis. Refugee advocacy groups assisting those living on Nauru, however, have said that none want to make the move to Cambodia.

The deal was also sweetened by a $40 million aid package from Australia to Cambodia.

Joe Lowry, regional spokesperson for the International Organization for Migration, has told The Cambodia Daily that the organization would assist the countries in carrying out the resettlements, but only if certain conditions are met. These have not been made public.