Cambodia’s government is to lower the charge to US$4 for passports on learning many are resorting to fraudulent documents. 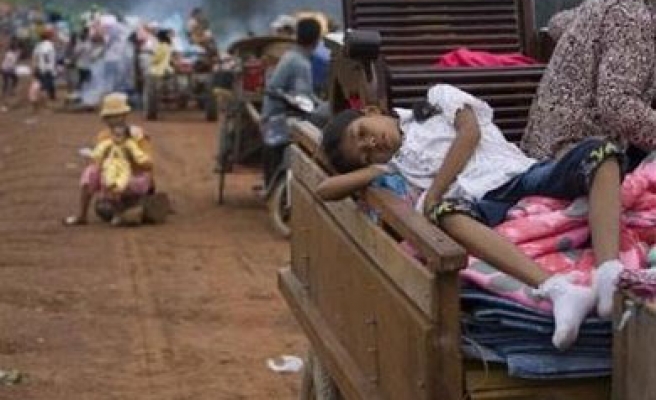 The Cambodian government says that 13 illegal migrants have been arrested in Thailand after Thai authorities found their documents to be fraudulent, local media reported Saturday.

The past few weeks have seen more than 200,000 migrant workers pouring back over the border to Cambodia after an announcement by the military junta—which overthrew the government last month—that illegal migrants would be arrested and deported.

The junta says they did not mean to spark the mass exodus, but last week Cambodian Interior Minister Sar Kheng lashed out at the regime, saying they “must be responsible for the problems happening, including the loss of lives.”

At least eight Cambodians have died in vehicle crashes in the panic to get home.

The Cambodia Daily quoted Foreign Affairs Ministry Spokesman Koy Kuong as saying of the 13 detained Cambodians, “I heard that the Thai authorities are preparing to send them to court.”

He added that Cambodian authorities in Thailand would try to organize legal representation for them.

According to the Daily, the Foreign Ministry believes that only about one quarter of the 400,000 or so migrant workers in Thailand have the correct documents allowing them to work there. This has long been blamed on the high costs of acquiring such documents, with even a passport costing a hefty US$124.

However, the newspaper reported that in order to make things easier for migrant workers, Prime Minister Hun Sen had signed Friday a sub-decree saying they would be charged only US$4 for passports.

“The tax will be the state’s burden, but the workers must pay US$4 for the cost of... photographs,” the sub-decree reportedly read.

Thailand has always been a popular destination for Cambodian workers who can earn far more money there to send home.

The recent mass exodus initially caused chaos on the Cambodian side of the border, but rights groups say things have since calmed down.

“The junta needs to reverse this disaster by quickly putting into place genuine reforms that would protect migrant workers’ rights, not threaten them,” Adams added.