Four activists handed 1-year sentences, $500 fine, one day after 7 others given same penalties. 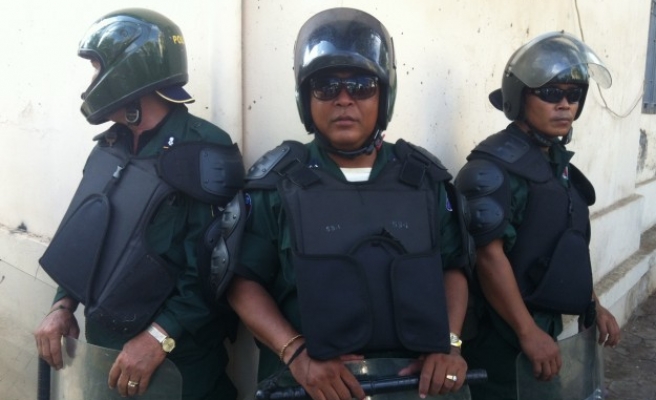 A Cambodian court sentenced three land activists and a defrocked monk to one year in prison Wednesday, a day after they were arrested for protesting the trial of seven others.

The four were also fined $500 each after being found guilty of obstructing a public official with aggravated circumstances, the same penalties given to the seven women Tuesday, according to local rights group Licadho.

One was also accused of possessing fake documents that continued to identify him as a monk.

Cambodian rights groups and unions criticized Wednesday the earlier jailing of the activists within 72 hours of their arrests for protesting about flooding said to be caused by an abandoned construction site.

A statement from 30 organizations condemned the conviction of the seven members of the Boeung Kak Lake community, familiar faces at many of Phnom Penh’s protests on land and human rights issues.

“This once again demonstrates how the judicial system continues to be abused in order to intimidate activists with a complete lack of accountability,” Licadho Director Naly Pilorge said in the statement.

They were arrested Monday after dragging a bedframe - one of many objects the protesters have used to draw attention to their protest - into the road outside municipal offices to draw attention to flooding in Boeung Kak, where a lake has been filled in by Shukaku Inc, a company linked to Senator Lao Meng Khin.

Licadho said the trial had been hastily arranged and sent to a trial judge without being investigated.

Speaking to the Anadolu Agency, Sok Sam Oeun, executive director of the Cambodian Defenders’ Project, said the court had not been following normal procedures.

“In a summary procedure, the prosecutor, especially in cases of flagrant crimes, can send the case to the trial judge directly,” he said.

“If they [the defendants] understand clearly about this procedure, you can say it’s fair, but if they make a judgment without informing them about their rights to counsel and waive the summary procedures, I think it’s not fair.”

Around 3,000 families were evicted to make way for the Boeng Kak lake project, which has since stalled, leaving a barren wasteland where the lake once stood. Residents claim the work has caused severe flooding following heavy rain and poor drainage.

Land rights are a prominent issue in Cambodia where developers, often connected to powerful government figures, are given or take residential or farm land.

The case of Boeng Kak is one of the most high profile, due in part to the site’s location at the center of the capital and the residents' unrelenting protests.