Since Monday, police have arrested ten land activists, two opposition party members and another monk - in addition to the two arrested Wednesday 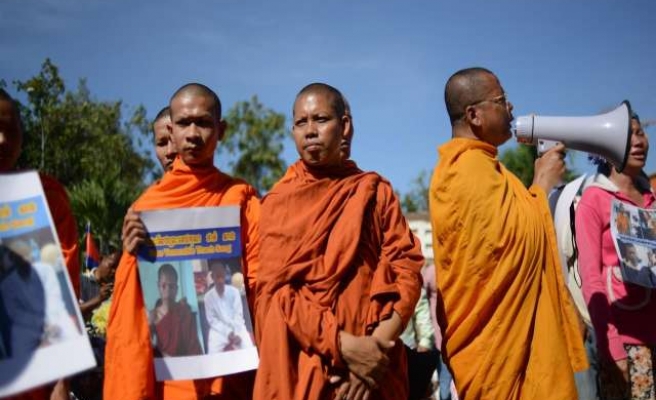 Around 70 people have rallied outside Cambodia's National Assembly in support of monks and other activists jailed this week - arrests a prominent monk has described as a crackdown on Buddhist clergy involved in politics.

Some held up posters carrying pictures of two young Buddhist monks arrested Wednesday - both in their robes and after having been defrocked - for carrying bags of bamboo poles, to which Buddhist flags were attached.

The monks were subsequently defrocked and detained, according to The Cambodia Daily.

Since Monday, police have arrested ten land activists, two opposition party members and another monk - in addition to the two arrested Wednesday. Of these, 11 are now spending the next year in prison.

“Multimedia monk” Luon Sovath told the Anadolu Agency on Friday that authorities were determined to curb monks' involvement in politics.

“They want to cut down, destroy and clear all the activist monks that join the social justice demonstrations; they threaten and stop activities and tell monks in Cambodia not to be involved in these issues,” Sovath, who has thrown his support behind a number of human rights issues and was the recipient of the 2012 Martin Ennals Award for Human Rights Defenders, told AA.

He described the situation for activist monks in Cambodia as “very, very bad,” and warned that the government would “continue [its crackdown], one by one.”

He himself is facing trial next week on a charge of incitement, which he said is politically motivated.

The two monks arrested Wednesday - Khit Vannak, 26, and Sang Kosal, 19 - were apprehended as they made their way to a pagoda called Samakki Raingsey, which has become a haven for activists travelling to Phnom Penh to highlight various issues in their communities.

The Daily reported that the pair planned to accompany some villagers from the northernmost province of Preah Vihear who wanted to march to the National Assembly to seek resolution for a land dispute.

It said the two were then questioned at length by the deputy prosecutor of the Phnom Penh Municipal Court about their involvement in previous protests, which included the burning of Vietnamese flags outside that embassy last month. They were then charged with participation in a criminal association, it said.

Independent political analyst Lao Mong Hay told AA that the week’s events are a sign that the ruling Cambodian People’s Party is flexing its muscle and reminding the public who is in charge.

“It seems that the ruling party has become more impatient and intolerant towards open criticism,” he said by telephone.

“Now that the opposition is weak, they are using it to silence the critics.”

He said the treatment of the monks this week has become a “big national issue, because monks are venerated people in Cambodian society and I think, to my knowledge, there has been no such arrests and forceful defrocking of monks” before this.